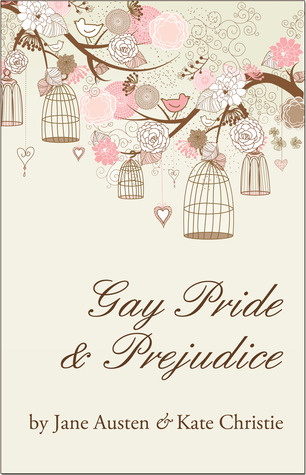 At this point, I’m kind of convinced that Kate Christie and I have some bizarre rainbow mind connection we’re not aware of yet.  Not only is “Gay Pride and Prejudice,” her delightful book, an idea I’ve had in the back of my head for several years, but it follows the same romantic trajectory that I would have used.  All I can say is, great minds think alike, and Christie has done such a marvelous job and I’m glad someone got around to gay adaptation of this story.  It’s about time.

Christie’s book follows the current trend of classic literature with a twist.  There’s been “Pride and Prejudice and Zombies” (which has since spawned a sequel and graphic novel), as well as “Sense and Sensibility and Sea Monsters,” and it seems fitting that someone’s updated a classic book to include something a bit more prevalent in contemporary culture.  Not to make sea monsters feel overlooked.

The book is great fun.  It’s clear that Christie worked to keep as much of Austen’s original language and while this edition does require a bit more exposition, the prose still retains Austen’s sparkling lightness.  Christie also does a wonderful job of letting the reader in on the joke while still giving them plenty to wonder about.  It’s refreshing to see a book about lesbian romance in which being a lesbian is not the big scandal or secret.  We are not on the edges of our seats wondering who is gay, but wondering who they will end up with.

What I liked most about reading this book was wondering in what ways it would deviate from the original.  All of the original elements are still there – a relationship initially based on pride and disdain, an unexpected declaration of love, family scandals, and some weddings – but they’re all tweaked slightly.  Discovering just how they would be tweaked and how much the plot would curve while still following the path we already know.

While I thoroughly enjoyed this book, I did have a couple small complaints.  The narrative did tend to leap from one character to another and it was hard to preserve Austen’s narrative style that was so daring at the time.  The original novel stays resolutely in omniscient until it leans gently towards a character and gets so close with its third person narrative that it dips into a stream of consciousness moment before springing away again.  I understand why Christie opted for a more roving close third, we would never have gotten anyone’s sexuality through dialogue and the novel would have been slowed down considerably.  And my other minor complaint does include a small spoiler.  It will be in the next paragraph.  I think that’s fair warning.

Because I’m a romantic, I was pretty bummed there wasn’t a first kiss scene.  It’s totally silly, and there probably isn’t one in the original book, but I still wanted it.  I was also kind of surprised, just because Christie had stayed pretty close to the Austen pastiche, that there was direct mention of sex.  But it was kind of fun.

That’s all for the spoilers.  “Gay Pride and Prejudice” is great fun to read and I’ve already told all my friends to read it twice.  I’m excited to see what’s next for Kate Christie, maybe even some more gay adaptations of classic literature.