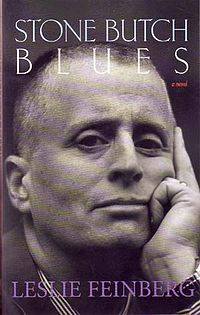 A few weeks ago, I decided to bring a book into the tub for a relaxing bubble bath. When the temperature was right, I gingerly picked up the paperback and eased my way into the frothy suds, cautiously avoiding the slightest splash. I took careful pains to hold the book a deliberate 6-8 inches out of the water. I even piled up towels at the edge of the tub in case of slippery-fingered emergency. It didn’t matter; within 20 minutes the book was completely waterlogged. The culprit? Not bathwater, but tears. Stone Butch Blues by Leslie Feinberg had me weeping by the end of the first chapter.
Stone Butch Blues is a beautifully written novel. The main character, Jess, is a young Jewish butch coming of age in the late ‘60s. Drowning in loneliness, Jess finds companionship in the queer community frequenting working-class gay bars. In this pre-Stonewall era, however, their mere existence is enough to prompt brutal attack from all sides. As the story unfolds, each of these characters weather hardships of an enormity I can barely comprehend.

Jess is a complicated character, and the book (thankfully) never backs away from this. I particularly appreciated the range of characters shown throughout in the book. “Butch” identity is not reserved strictly for lesbian women that present themselves in traditionally masculine ways; men, straight and bisexual women, and transgender people can all lay equally legitimate claim to the identity.

Stone Butch Blues is the winner of numerous literary awards, and its clear to see why. This book is an essential read — and not just for the person who “doesn’t identify as a man and is at least some of the time attracted romantically and/or sexually to others who do not identify as a man” (ha). This is a book for anyone with a soul.

Stone Butch Blues is one of the most widely read pieces of LGBT literature, and appears on the shelves of many major retailers.