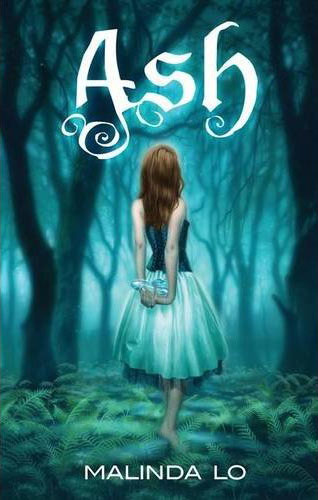 The first chapter of Ash by Malinda Lo stopped me in my tracks. Lo’s writing here is not the type that should be read hurriedly — speed reading here would be like sprinting through the Taj Mahal, blindfolded, and calling it sightseeing. Such a waste! No, readers will do best to advance slowly. Pause. Ponder. Resume wandering, slowly. Bask in each word of the luminous and evocative prose. This book is one worth lingering over.

Placed in a vaguely medieval secondary fantasy world, this “Cinderella” retelling follows young Aisling (“Ash”) as she comes to terms with personal tragedy and struggles to work out her place in the world. Curious, independent, and full of longing for her lost mother and the fairy world, Ash reminds me heavily of the character Saaski from The Moorchild. Like Saaski, Ash has to make a choice between two very different worlds. Unlike Saaski, Ash has no human boy companion to help her. Prince Charming does no rescuing; indeed, Ash shows very little interest in him whatsoever. But this does not mean that she is alone.

Though Ash never declares a label for her sexuality, her burgeoning relationships indicate bisexuality. (Note that as a young adult novel, there’s no explicit sex of any kind in the book.) In this world, same sex relationships are as commonplace and unremarkable as opposite sex relationships. Lo explains on her website, “In Ash’s world, there is no homosexuality or heterosexuality; there is only love. The story is about her falling in love. It’s not about her being gay.”

My favorite thing about this book is the depth and realism that Lo depicts in her inter-character relationships. Heartwarmingly full of that familiar first time awkwardness, Ash’s relationship with the King’s Huntress, Kaisa, is a pleasure to watch unfold. Conversely, her incisive relationship with the dangerous and seductive fairy Sidhean is bone-chilling… but mesmerising. Even the complicated sisterly bond Ash has with her two stepsisters — absolutely beautifully rendered.

I won’t ruin the ending for you, but I will warn you that it comes without fanfare, tacked on almost as an afterthought. It wasn’t terrible, but the big, book-long buildup had me expecting more. Luckily, there’s a prequel?

One Reply to “Laura Mandanas reviews Ash by Malinda Lo”