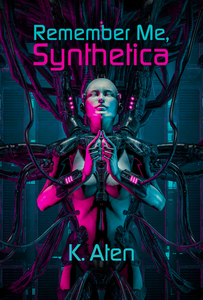 “I care about you, Alex. […] Part of me says you’re too good to be true, but the greater part of me says that if I give you a chance, you’ll be worth it.”

Remember Me, Synthetica by K. Aten is a fun new lesfic novel with sci-fi elements, available now from Regal Crest!

Normally I begin a review with my thoughts, but there’s so much to unpack in Remember Me, Synthetica that I decided to lead with the synopsis, for context.

What happens when a woman loses her memory but gains a conscience?

Dr. Alexandra Turing is a roboticist whose intellect is unrivaled in the field of artificial intelligence. While science has always come easy, Alexandra struggles to understand emotional cues and responses. Driven by the legacy of her late great-uncle, she dedicates her life to the Synthetica project at her father’s company, Organic Advancement Solutions (OAS).

Her life is rebooted when she wakes from a coma six months after being struck by a car. Traumatic brain injury altered Alex’s senses, her memory, and her personality. Despite the changes, she feels reborn as she navigates her way back into her old life. Part of her new journey includes dating the alluring Doctor of Veterinary Medicine, Emily St. John.

Emily is enamored with the hyper-intelligent scientist, but there are things about Alex and OAS that don’t add up. With Emily’s prompting, Alex undergoes testing that leaves her with more questions than answers. What she discovers changes more than her life, it will change the world around her.

Even with context, where to begin? Synthetica is unique in that it truly toes the line between romance and genre fiction without ever fully leaning in to one of the other. Yes, the adorable butch/femme relationship between Alex and Emily–which I couldn’t help but root for from the moment they met–gets a lot of “screentime,” but we also spend a lot of time learning about the various scientific ventures at OAS.

It’s obvious Aten put a lot of time and effort into her research into the more academic/scientific aspects of the novel, which I can definitely appreciate. Not all of the technology referenced or explained in Remember Me, Synthetica exists yet, but I couldn’t identify what exists vs. what Aten came up with herself if you paid me, which shows how seamlessly she managed to weave the science fiction elements into the story. At times the story did feel a bit weighted down by jargon, but I think the use of scientific terms was important for Alex’s characterization.

That being said, I would still be more apt to shelve Synthetica as a f/f romance than as a science fiction novel, if I had to choose between the two. I’ve begun describing Synthetica and other books in the same vein (like The Lily & The Crown by Roslyn Sinclair, which I also loved!) as “lesbian fiction novels with sci-fi themes/elements” because it feels more accurate.

In the spirit of transparency, I have to admit that I had a lot of mixed feelings about Synthetica at first. It was definitely fun to read, but I found myself annoyed by some things that I thought were strange stylistic choices on the author’s part. At about 70% in, I began to panic. I’ve enjoyed much of Aten’s past work, and it felt like Synthetica was lacking her usual spark. My worry completely evaporated not long after, when she served up a plot twist of truly epic proportions! I won’t go into detail, because this is a book I wouldn’t dare spoil for potential readers, but I will say that once the plot twist hit, all of the things I’d disliked about the novel made complete sense, and no longer bothered me.

All of that is to say, if you pick up Synthetica, keep an open mind, and read it through to the end! Everything will make sense in time, and honestly, this book had the best ‘pay off’ of any novel I’ve read in a very long time. If you enjoy romance novels that are plot driven and thought provoking, Remember Me, Synthetica might be the book for you!

Remember Me, Synthetica At A Glance:

ARC Note: A huge thank you to Regal Crest and K. Aten for sending me an advance copy to review! All opinions are my own.

Landice is an autistic lesbian graphic design student who lives on a tiny farm outside of a tiny town in rural Texas. Her favorite genres are sci-fi, fantasy & speculative fiction, and her favorite tropes are enemies-to-lovers, thawing the ice queen, & age gap romances. Landice drinks way too much caffeine, buys more books than she’ll ever be able to read, and dreams of starting her own queer book cover design studio one day.

You can find her as manicfemme on Bookstagram & Goodreads, and as manic_femme on Twitter. Her personal book blog is Manic Femme Reviews.