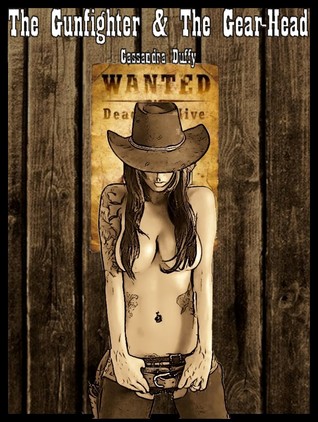 Cassandra Duffy’s The Gunfighter and the Gear-Head is a fun melding of steampunk and Old West in a post-apocalyptic setting. The story centers around Tombstone – which, after a cataclysmic war between Earth and an invading alien force – has reverted to a harsh, dangerous place ruled by outlaws. The story follows Gieo, a dirigible pilot, mad scientist, and all-around genius, and Fiona, a former lingerie model who is now one of the most powerful and respected gunfighters in the area. Their relationship and its twists and turns forms the core of the plot as the characters battle cultists, other outlaws, and the aliens.

When I first started reading, I was initially somewhat put off by the frequency and descriptiveness of the sex scenes, owing to my personal preference for mooshy romance and drawn-out courtships. Gieo and Fiona didn’t know each other very well the first few times things got heavy between them, but I was drawn through the story by the complexity of their feelings for each other, and by the fact that those feelings were constantly evolving in reaction to events and revelations about each other. As they got to know each other, and I got to know both of them, their relationship became my favorite part, and I was rooting for them the whole way through. They went through plenty of rough spots as lovers, and I felt that these were all handled realistically. I was never left unsatisfied or doubtful about the nature of their feelings for each other.

Even though Gieo and Fiona’s relationship was my favorite part, it was Cassandra Duffy’s worldbuilding that impressed me the most. The history of the alien invasion and the years after it unfolded slowly and tantalizingly. Duffy also handled all of the technical terms utilized in describing Geio’s inventions and steampunk contraptions impeccably – they were completely understandable to me as someone who knows next to nothing about how machines work, but they were specific enough and showed enough expertise that I was convinced Gieo knew exactly what she was doing. I was also happy that Gieo is Korean, since queer literature in always needs more women of color. All of the characters were well drawn and had sudden flashes of depth that kept me engaged with each one.

I was sad about some of the things that took place at the end, but as luck would have it, there’s a second book in the series: The Steam-Powered Sniper in the City of Broken Bridges. From the Goodreads description, it appears to follow one of the side characters (a personal favorite!) so I’m looking forward to reading it.