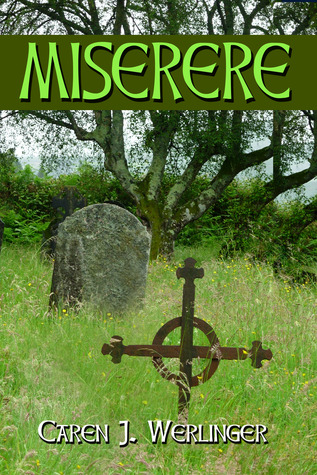 Miserere by Caren J. Werlinger was an utterly engaging read. I was captivated from the first page and could scarcely put it down. It’s an intriguing mix of mystery, ghost story, love story, and social commentary, and Werlinger melds all of these together to create a cohesive and compelling story.

When the story opens, it seems like there are two separate plotlines. In the first, Caitríona Ní Faolain and her older sister – two young Irish women in the 1850s – are sold by their father to the English owner of an American plantation in exchange for land to help feed their starving family. In the second, set in the late 1960s, Connemara Mitchell and her family move to their mother’s ancestral home in West Virginia when her father goes MIA in Vietnam. The focus shifts back and forth between these two seemingly unrelated stories until it becomes apparent that Conn is in fact Caitríona’s descendent and is dreaming about the events of her life. Conn is only ten or eleven years old, and yet she has a unique understanding of the world that lends a maturity to her while at the same time coming into conflict with her natural immaturity. As she explores her new house, she happens upon secrets – hidden passageways, lost diaries – that begin to intertwine with her dreams and compel her unravel the mystery. The more she learns, the more she realizes how vitally important it is for her to find out what happened to Caitríona and her family and prevent it from happening again.

I’m not sure if this was meant to be a children’s book or young adult book (going strictly by the age of the protagonist, I guess it was) but it definitely tackled lots of difficult topics in a way that I feel would be understandable and helpful to younger people. There were so many things at work in the story: spousal abuse, child abuse, poverty, war and its effects on the families of soldiers, prejudice. Racism was the most prominent of these issues. Conn and her family became friends with a black teacher-turned-carpenter, Abraham, who helped them upgrade their house, and the 1968 plotline focused just as much on the bigotry, hatred, and violence he was put through as on the mystery of Caitríona’s fate. Conn and her family were shunned as well for being friendly with him, and the slowly changing times were illustrated through a local white boy who grew to respect and admire Abraham over the course of the story.

I thought that the message of love and respect was an important one, and it would be relatable for white children reading this, but at the same time, I was a little uncomfortable about the saintly light Conn and her family were shown in by virtue of their treatment of Abraham. I felt like the story fell into a trap of “enlightened white family arrives in backwater southern town and effortlessly changes public opinion by treating the black citizens like human beings”. Abraham was a complex and likable character, but he was never given the chance to stand up for himself, and it was always Conn or her mother who rescued him – whether that meant verbally defending him, instituting a boycott against a storekeeper who refused to serve him, or literally saving his life. As a white girl born in the 80s, I can’t have any idea what it was like to be a person of color in the 60s (or any time), but it felt very disempowering for the white characters in this book to always be the saviors.

Miserere was largely a mystery with strong social commentary, but it was also a romance. Since I got this review copy from the Lesbrary, I was waiting eagerly for the lesbians to show up – and the lesbian content was very well done and gently hinted at before being fully revealed. Caitríona fell in love with Hannah, a black slave who lived on the same plantation, and Hannah was the key to the mystery. One of the reasons Conn is able to break her family’s curse is because she is the first person in the family to be able to understand Caitríona’s feelings for Hannah. Although she’s not old enough yet to be particularly interested in romance, she knows – especially once she experiences Caitríona’s feelings through her dreams – that she’ll fall in love with a woman someday herself. It was comforting to read a story where the lesbian romance was not the focus. It was at the heart of the story, the driving force behind Caitríona’s actions, but it wasn’t treated as a novelty or peculiarity. I hope that more books continue to be written along that line – where being a lesbian is an important part of a character, but not overwhelming her personality to the exclusion of all else. Overall, I was impressed by the quality of writing in Miserere and by the streamlined, well-constructed plot.

One Reply to “Katie reviews Miserere by Caren J. Werlinger”