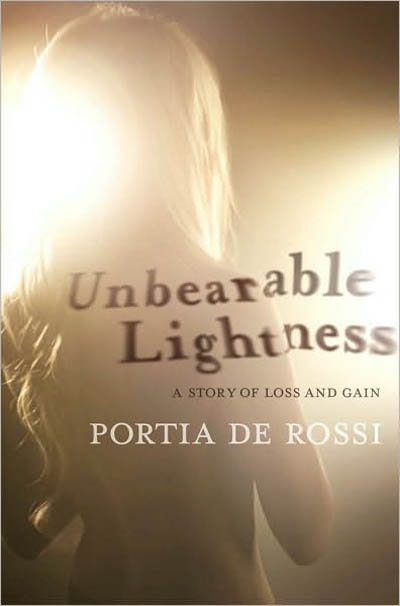 When Portia de Rossi first released her memoir, I was just testing the waters of an eating disorder and six years past admitting to myself that I wasn’t straight. I desperately wanted to search the book for weight loss tips, but it had been described as so inspiring that I was afraid it would convince me to recover before I even got started (Plus I was afraid everyone would think I was a lesbian if they saw me reading a book by a famous lesbian). Throughout the next few years, I debated reading it, alternating between fear of recovery and fear of relapse. When I found it at a library sale a couple of weeks ago, I figured it was time and finally went for it, and I have to say, it surprised me.

First of all, I think it’s worth noting that I’m probably the healthiest I’ve ever been with regards to my mental health, and I participate in therapy regularly, and I found this book very triggering. The main focus of the memoir is de Rossi’s eating disorder and the time before her recovery, and this includes detailed descriptions of the methods she used to lose weight, her thoughts and feelings during this time—specifically self-hatred in the form of body image disturbance and internalized homophobia—and of course, numbers (weight, body measurements, calories, number of meals, number of exercises, and the list goes on and on as anyone with an eating disorder can tell you). If you’re thinking about reading this book to find some inspiration to work toward a healthier mindset and lifestyle, you will probably be disappointed.

There is plenty of debate around the topic of recovery when it comes to mental illness, especially among people with eating disorders, but I think people on all sides would agree that de Rossi’s outlook on her personal struggles and recovery are not exactly healthy. It could be that she was not far enough from the experience to look back with clarity, but it seems that she puts a lot of focus on a sudden and complete change brought on by her serious relationship with her ex-girlfriend and then maintained by her relationship with her wife. I don’t want to police people on how to handle their eating disorders, especially someone I don’t actually know personally, but I do worry about the message people who are in the depths of their struggle will take away from this, especially impressionable young girls.

Not to mention, there are some cringe-worthy parts in the epilogue that kind of stung, like the conversation between de Rossi and her wife, Ellen DeGeneres, in which Ellen calls de Rossi crazy, and a “poor thing” whom she wishes she could have “saved.”

“You did save me. You save me every single day.” I kiss her and get up off the bed to make her coffee. “I’m so proud of you, baby. It’ll help a lot of people.” As I pour the coffee, she suddenly appears at the doorway of the kitchen, her blond head poking around the door. “Just be sure and tell the people that you’re not crazy anymore.”

I’m sure there are people who will say I’m being too sensitive, but I’m also sure I’m not the only one who would be pretty upset if my significant other said something like that.

There is no perfect eating disorder memoir, just as there is no one, perfect and healthy way to recover from an eating disorder, and I respect that de Rossi’s story and methods are not the same as mine, but I can’t help but worry for her and for some of the people who might read this book.

However, even with my disappointment with the “recovery” aspects of the book, I thought the story was relatable, and de Rossi’s writing was simple yet captivating. She perfectly captured the experience of living with an eating disorder, from the life-altering moments to the mundane, stuck-in-traffic ruminations. One of my favorite passages is her description of the experience of eating nachos.

The blend of cheese and sour cream with the crispiness of the corn chips and creaminess of guacamole will always turn a sour mood into a happy one. A peace came over me when I ate food like that. Like life had no other meaning than pure enjoyment. I had nowhere to go and nothing to accomplish. For that moment, I could put life on hold and believe I was perfect the way I was. I was focused on the present—in the moment—and the moment was bliss on a corn chip.

The writing isn’t anything mind-blowing or particularly unique as it might be if written by a ghostwriter, but it is honest and real without the need to prove herself as a writer that is evident in other celebrity memoirs. Also unlike a lot of other celebrity memoirs, there isn’t a lot of name-dropping or bragging. Yes, a few stars are mentioned, as are award shows and paparazzi, but it’s done in a way so that it just feels like part of de Rossi’s job, just as it would if she was talking about working in a cubicle and talking to the guy in the copy room. So if you’re just looking for some Hollywood dirt or an inside scoop about Ally McBeal or Arrested Development, this probably isn’t the book for you.

This book also might not be for you if you’re just looking for a story about a famous lesbian’s coming out process. Although de Rossi puts a lot of emphasis on her experience in the closet and how it impacted her mental health, the actual descriptions of that experience are sparse and dull in comparison to the raw emotions behind her descriptions of her disordered eating and her relationship with her mother.

Unbearable Lightness wasn’t the inspiring push to recovery or the coming out story I was expecting. It’s not something I would recommend for people who are still feeling hopeless and trapped in their eating disorder, but it was still a breath of fresh air for me after deciding to leave my eating disorder behind once and for all. It made me feel less alone as de Rossi wrote the words that I’m still too afraid to speak. This also might make it a good read for anyone who has a loved one with an eating disorder so they can better understand what their loved one can’t explain. It could also start some healthy conversations. Above all else, it’s an interesting read and good as a memoir as well as a book about eating disorders. I just think it’s good to approach with caution.

4 Replies to “Katelyn reviews Unbearable Lightness: A Story of Loss and Gain by Portia de Rossi”