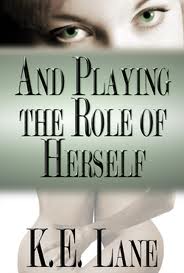 In the world of lesbian romance, I’d give And Playing the Role of Herself a “noticeably better.” It gets a “two thumbs up” if you already like the genre.

K. E. Lane gets all the basic elements right.

The protagonists are likeable, and their growing intimacy is well developed.

The sex scenes are frequent and detailed enough that I felt like I got my money’s worth. However, they are not gratuitous or embarrassingly anatomical. Nor does Lane fall prey to any unfortunate metaphor usage. The waves of pleasure did not crash over the shore of her womanhood, and that’s a good thing in my book.

Additionally, the obstacles to the protagonists’ love are plausible and do not rely on either character being stupid or cruel. I hate romance novels where the obstacles derive from one person having the emotional intelligence of an area rug while the other acts like an angry pit-bull.

In And Playing both women are closeted actresses. The pressure of their jobs and the media spotlight in which they find themselves present good reasons why they cannot simply skip off into the sunset on page 50.

All in all, it was a thoroughly satisfying read with a good happy ending.

I have only two complaints.

One is that Lane has not written anything else.

The other is a bit more technical. And Playing is written in the first person, and I never quite believed that the first person voice was indeed a successful Hollywood actress. To be fair, the protagonist, Caidence, just landed her first big role. She is new to fame. However, she is successful enough to own a house, to drive a sexy convertible, and share a trailer with one of Hollywood’s hottest stars. She’s not the girl next door – but that’s how the narrative voice reads.  Caidence sounds like she could be a middle school science teacher or a friendly postal carrier.

In particular, I was struck by the way the narrator describes her beautiful girl friend Robyn.  The descriptions are good, but they sound like the things I would say about a beautiful Hollywood actress. The only problem is that I am an English professor from rural Oregon.  In the world of Hollywood stars, where beauty is a commodity everyone buys and sells, there is a different vocabulary.

This would be a minor quibble except that Lane misses out on some opportunities to enhance the intensity of the novel. If we really felt what it was like to be in the media spotlight 24/7, if we really understood the ways Hollywood can make and break people overnight, the plot points would pack a greater punch.

With that said, I didn’t pick up And Playing the Role of Herself because I wanted a treatise on Hollywood culture. I wanted to read a story about nice women falling in love. Romance is my comfort food. Sometimes it is okay for a bread pudding to be just a sweet treat to enjoy at the end of a long day or a frazzled week. If that is what you are looking for, And Playing the Role of Herself will not disappoint.

5 Replies to “Karelia Stetz-Waters reviews And Playing the Role of Herself by K. E. Lane”