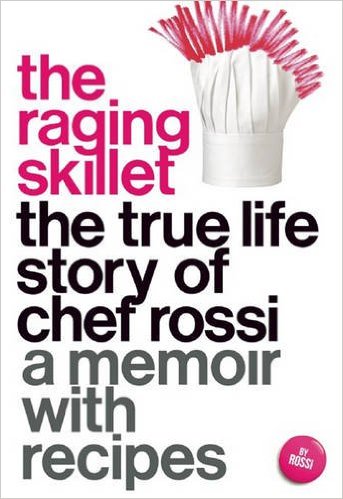 After reading The Raging Skillet, I’m not certain whether I’m desperate to marry the legendary culinary mastermind known simply as Rossi or to live within her skin. It would be futile to deny my appreciation for the handful of openly lesbian chefs whose careers have blossomed in spite of – or perhaps due to – their determination to manifest a passion for food while remaining true not only to their culinary sensibilities but to the very essence of who they are. Gabrielle Hamilton, even amid the rumors surrounding her personal life, most notably comes to mind. However, none have inspired within me the spirit of resilience, determination, creativity and authenticity to quite the extent that Chef Rossi has. Her journey’s not been an easy one; she earned every bit of her success. And, the woman who’s lived to tell the story holds my admiration as well as my most heartfelt gratitude, for I just may be something more of a force in my own right for all that she’s endured.

It is to the introduction of the microwave oven that Rossi attributes her professional destiny, for once the appliance found its way into her family’s home, seldom did her mother serve any of the Hungarian faire that had graced the table, day in and day out, prior to its arrival. Unimpressed with the flavorless, prepackaged dinners that took the place of her mother’s slaved-over kosher dishes, the young Rossi began inventing and presenting concoctions that gleaned the enthusiasm of her family, later the adoration of her stoner friends and eventually the devotion of the drunks to whom she served avant-garde nachos in an attempt to sober them up before last call. It didn’t take long for her to realize where to access her influence.

Aside from a two-week bartending course, Rossi embarked upon her culinary career with no formal training. However, her chutzpah landed her positions in the food industry shortly after she ventured out on her own as a teenager, fleeing the oppressive Hasidic expectations of her family and religious community. Beyond a stint selling subscriptions forThe New York Times, a gig on The Matthew Rousseau led to both dive and ultra-trendy establishments until she found herself named by Zagat “the wildest thing this side of the Mason-Dixon Line.”

Her anecdotes pertaining to her mother’s frugality and over-the-top kitchen dynamics inspire laugh-out-loud snorts and giggles against a backdrop of poverty, friends lost to AIDS and the challenges of proving herself in what was, especially in the 80’s, very much a man’s world. Rossi’s sense of humor proves caustic while still rather cornball, a combination I found to be terribly endearing.

I appreciated that Rossi opted for a less sentimental approach to her hardships and losses, for their gravity is evident in simply being what they are. In addition, the objectivity with which she addresses painful circumstances serves as indicative of her forward focus and innate refusal to become mired within the muck of a life lived well and boldly.

Though Rossi admits to a tendency to kvetch, or complain, the reader never sees it. She attributes the wise words “Sweetie, I come here to work, not talk about what hurts. What does not? Everything hurts. This is life… so forget it. Make some gorgeous food!” to Niko, a chef who over time assumed the roles of brother, son, wife and prodigious butter-plater, but I suspect that his guiding principles are as much hers as his own, even if she hesitates to give herself credit for it.

The chapter pertaining to her time spent at Ground Zero was perhaps, for me, the most profound of them all. Rossi does an outstanding job of capturing the essence of 9/11’s early aftermath and humanizes what remains, for anyone born post-WWII, the most jarring event of our lifetimes.

Each chapter of The Raging Skillet is accompanied by a couple of recipes associated with the events described within. Viewing the measuring cup as a “soul-crushing” instrument, Rossi notes amounts in plops and coffee cups of a given ingredient, making the recipes incredibly accessible; however, I would have given anything to learn more about her technique and creative process, secrets and all. I’m just that greedy… though it doesn’t stop me from noshing “Riverboat Guacamole” even as I pen this review.

Within the acknowledgements, Rossi thanks her girlfriend, Lydia, for “filling a void in my heart that I didn’t know was there,” so I won’t hold my breath for a proposal. However, I will continue to ponder the lessons that Rossi’s learned, share her story with fellow foodies and remind myself, when push comes to shove, within or beyond the kitchen, to hold my own when it matters and find humor in the rest.