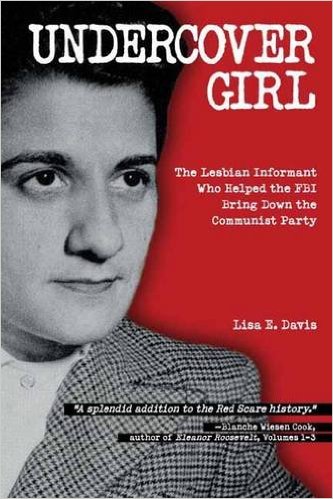 Undercover Girl chronicles the exploits of Angela Calomiris, an informant for the Federal Bureau of Investigation (FBI) during the 1940s. An otherwise easy-to-miss figure in history, author Lisa E. Davis goes behind-the-scenes to reveal a more complex story of Calomiris’s life. The depiction of her impoverished childhood in New York through her fifteen minutes of fame as a witness for the prosecution during the Smith Act trials of 1949, and how it clashed with the version that Calomiris presented to the press, is fascinating. Author Lisa E. Davis also explores the divisive nature of Red Scare tactics, the ways in which it pitted groups against each other, and promoted fear, xenophobia, racism, and homophobia. This provides essential context for Calomiris’s behavior and how her fabrications were positively received by mainstream American citizens, the press, and government agencies. Davis’s appraisal of her subject is critical and well-researched.

The Photo League (TPL, 1936-1951), a club focused on capturing the lives of ordinary folks, was Angela’s primary target during her time as an FBI informant. TPL drew the attention and ire of the FBI due to its advertisement of club classes in The Daily Worker, a newspaper of the Communist Party USA, and its photographs chronicling New York City life, which included images of African-Americans. Her bread and butter income came from divulging names and activities, as well as her own amateur photographs, of the TPL to the FBI. A closeted lesbian, Calomiris played up her public image as an “All-American girl” (read: America first, heterosexual). As Davis delves into Calomiris’s appearances in the media and on the witness stand, contradictory information proves challenging to untangle. Readers are treated to an epilogue of the informant’s life after the trial. Did she attain wealth and lasting fame, as some of her fellow informants did licensing their stories in film and television? Did her duplicitous and fabulist tendencies continue to isolate her from friends and community?

Davis draws from de-classified FBI reports available through the Freedom of Information Act; oral interviews with people who knew Calomiris during the 1940s-1950s; archival collections; film, radio, scripts, and sound recordings; newspaper and journal articles; theses; and books. All of these materials enrich the narrative and provide the work with a credibility lacking in its subject’s own life. Calomiris’s keen desire for fame and fortune is perhaps one reason she meticulously preserved her extensive collection of newspaper and magazine articles, correspondence, and other ephemera. The large collection was ultimately bestowed, through the executrix of her estate, to the Lesbian Herstory Archives in New York City.

An engrossing tale for researchers, history buffs, and casual readers alike. Undercover Girl: The Lesbian Informant Who Helped the FBI Bring Down the Communist Party is slated for release in May 2017.