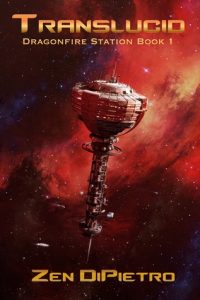 Translucid, Zen DiPietro’s first installment in her “Dragonfire” series, is a riveting space onion. And by “space onion”, I mean that Translucid is a tightly wound mystery, set on board the Dragonfire Space Station. No one is what or who they seem. Chief Security Officer (CSO) Emé Fallon awakens in sickbay with no memory of her personal identity. The shuttlecraft she piloted crashed into the side of the space station: an unusual malfunctioning coil pack, but nothing most crew members would consider anything but damned bad luck. Before her bed stand a distressed Sarkavian woman named Wren Orritz and a Bennite doctor named Brannin Brash (chief medical officer). Fallon’s initial confusion starts to sound like the Cars’ song, “Once in a Lifetime”. Who are these beings and why are they staring at me? Wren, it turns out, is her wife of six months, not to mention a high-caliber engineer on Dragonfire.

The how and why of Fallon’s memory loss are at the center of the action. Personal memories,  gone. In their stead, Fallon relies on instinct to suss out the person she is supposed to be, as well as tapping into the ship’s personnel records to glean whatever tidbits she can. She knows her height, age, noted abilities, and that she is of Japanese descent. Her skills and working knowledge of the ship, her duties, and protocol, on the other hand, reveal themselves to her as situations arise in which she has need of them. And aside from the black swirl-patterned tattoo on her hip, Fallon has no distinguishing characteristics. She has become one of my favorite characters because of her analytical mind, her constant drive for self-improvement, and her stalwart loyalty to her friends. She is also a total badass.

Some of the novel’s most poignant scenes occur between Fallon and Wren as they relearn their relationship. Fallon plays her cards close to the vest and does not readily accept her domestic situation. Indeed, she and Wren don’t share a bed when she returns to their quarters. It’s painful and confusing and awkward. These moments blend Fallon’s pragmatic disposition with a little-seen tender side. Later on, it’s revealed that the CSO’s marriage is improbable in more ways than one.

Fallon relies heavily on her instincts and her work routine aboard the station to uncover her “true” identity, a notion that becomes increasingly tenuous. Who can she trust, if anyone? Can she even trust herself? Was she a loathsome, duplicitous person? What were pre-accident Fallon’s motives and goals? As she and her carefully vetted band of confidantes probe for answers, more questions crop up as a result. The investigation is akin to finding the key for a room, only to find that the room contains more locked doors, that also have locked doors, that also have locked doors.

DiPietro has crafted a richly imagined universe in which species from across the galaxy meet to conduct business and personal affairs. The space station is part of the Planetary Alliance Cooperative (PAC), a large confederation of species. Raised on dreams of interstellar adventure, cooperation, and discovery, via Star Wars, Star Trek, and countless films, this world feels attainable–if just out of reach–for those of us existing in the early 21st century. Among the wondrous entities on board, you’ll find humans; the humanoid Sarkavians, Bennites, Rescans, and Atalans; and the Briveen, a species evolved from reptiles. For Fallon, knowing how to balance protocol and the well-being of the crew and residents with intergalactic multiculturalism is an essential and enjoyable part of her job. Welcoming a delegation of Briveen aboard the station, for example, requires lengthy social rituals. Other intriguing secondary and tertiary characters include Captain Nevitt (Dragonfire), an ambitious professional who does not disguise her disdain for her second-in-command; Brak, a Briveen who specializes in neural implants and travels with the hospi-ship, Onari; and Cabot Layne (Dragonfire), a Rescan who trades in antiquities and hard to find items. There are other figures who play crucial roles, but that information is classified (at least until you read the book!).

The main challenge for me in writing this review was capturing the spirit of the story while not giving away how the mystery unravels, which is key to the story. DiPietro’s writing style evokes vivid imagery. A few, well-placed brush strokes reveal a complex, exciting world in which everyday activities, such as shopping for artwork and eating out at restaurants, happen alongside cosmic diplomacy and neural implants. DiPietro only shows readers only what pertains to a scene or what Fallon discovers. This tight control of information is crucial to maintaining an atmosphere of paranoia and uncertainty. Weeks after reading the final page, I’m still chewing on it. Thankfully, DiPietro doesn’t leave readers hanging. The second installment, Fragments, followed in October 2016 and book three, Coalescence, came out in February 2017.

Until next time, then: “Blood and Bone”!