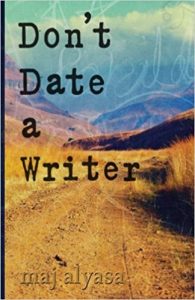 Inspired by a summer spent swirling between Germany, Spain, and Iowa City, Iowa, poet Maj al-Yasa explores the vagaries of love. This poetry collection is organized as a journey in four parts: Unrequited Love (I don’t understand); Requited Love (why you loved me once); Loss (and then let me go.); Vices (Asshole). Or, read more directly together as “I don’t understand why you loved me once and then let me go. Asshole.” In the foreword, al-Yasa ruminates at a bus station about the journey that resulted in these verses. The poems reveal a traveler, warts and all, as she makes her way through different continents, bodies, and memories. al-Yasa conveys a muddled romanticism, optimism, and cynicism, which renews in short cycles: infatuation and hesitation, finally getting what is desired, fleeing from connections like it’s a house on fire, but then loathe to leave.  al-Yasa exudes joyful abandon, insecurity, indecision, and a wanderlust that itches her mind like fiberglass. Despite the collection’s structure, I got the sense as I read that there isn’t a single beginning or end on this emotional journey; there’s just a past, present, and future tense. It also resonates with the sense that adulthood, and other mythical states, don’t exist as such.

A few of my favorite poems blend contrasts. For example, you encounter fragile confidence dressed up in boi-ish bravado, which falters and stammers at the sight of a beautiful woman in “she said nah (freestyle”. There are two acrostic poems that I stumbled upon like Easter eggs. An acrostic poem, for those who may be unfamiliar with this form, uses the first letter of a word in a line to eventually spell out a word. If you’re not paying attention, you can easily miss them. While I will leave it to you to find them (because that’s part of the fun in stumbling upon them), they stand out because the letters are in bold text. The imagery is straightforward, but at times there are artistic flourishes. “Our Colors” refracts a relationship through a ROYBGIV lens. You may not always like what is reflected in these pages, but it is honest and accessible.