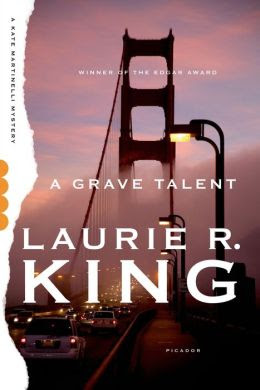 A Grave Talent is the 1993 debut novel of Laurie R. King and the first in her Kate Martinelli series.  King won an Edgar Award for Best First Novel and a Creasey Award from the Crime Writers’ Association for her first novel.  Avid mystery readers and fans of Sherlock Holmes may be more familiar with King’s Mary Russell series.

Two San Francisco investigators, Kate Martinelli and Alfonso “Al” Hawkins, newly partnered, look into a rash of murders of kindergarten-age girls.  Their bodies are discovered along “Tyler’s Road”, a small, rural community located outside the bustle of San Francisco.  Tyler’s Road hosts an assortment of people who want to avoid life on the grid, for various reasons.  Plenty of red herrings clutter the landscape.  One of the residents along Tyler’s Road is Vaun Adams, an artist with a dark past.  She becomes an early suspect, though her involvement is far more complex.

The mystery unfolds at a measured pace, fitting the dry and dogged style with which Al and Kate pursue the murderer.  The novel challenges the world of appearances, challenging the reader and the detectives to delve beneath the surface, whether that surface is Tyler’s Road as an Eden or the visage of a pale and aloof convicted murderer.

Laurie R. King writes in much the same way as Kate conducts her life.  The first ¾ of the book project a cool exterior, with her personal life a carefully guarded secret, even from the reader.  Both when we see Kate on the job and when we see Kate at home, we are the distant viewer, the outsider, no more privileged to know Kate than is her newly assigned partner, Al Hawkins.  Under the surface, however, her thoughts hum with reassurances that she can handle whatever comes her way and that her private life is the least of anyone’s concerns.

Martinelli is “Kate” to friends and “Casey” to everyone else.  Casey is derived from her first two initials; the name serves as another barrier between her personal life and her career.  The conscious disconnect between those two worlds offers a sort of mental and emotional protection.  Kate possesses a keen wit and a wry sense of humor that pairs well with Al’s laconic, dryly sarcastic wit.  I love how concisely King depicts the characters. Hawkins in a nutshell: “He missed little, reacted less, and thought incessantly about his work.” (Chapter 1).

She is in a tough line of work that can drain her emotional, mental, and physical energies if she isn’t careful to keep some part of herself for herself.  As a police officer, Kate encounters gradations of the good, the bad, and the ugly, the best and the worst that humanity has to offer.  Later events force the fiercely private investigator to open the doors of her home to her work.  The division between her career and her personal life blur towards the close of the case.

Kate considers the new assignment a “dubious honor”.  She isn’t sure if her position on the case is due to assumed need for a female face to present to the media and the public or if the brass believe a woman is “better with children” than men.  Whatever the reason, Kate proves her worth ten times over.

The evolution of Kate’s mindset about opening up her private life to the outside world does not feel forced, hurried, or out-of-character.  The novel was originally published in 1993, so that is a factor to consider when you read it.  Kate wrestles with her desire to retain a layer of silence over her life and with her partner Lee’s desire to live more openly. Kate’s fears that her male colleagues might abandon her on the job are not unfounded. Discrimination based on sexual orientation and gender identity was common across the United States, and remains an issue in many States and work cultures.  She also hesitates because the last thing she wants is for her hard won reputation to be replaced by ill-fitting stereotypes in the minds of her colleagues.  The supporting characters, especially the men and women who live within the unplugged world of Tyler’s Road, also defy being slotted into stereotypes.

King’s masterful use of language is one of my favorite aspects of the Martinelli series.  She wields her pen to great effect, altering the reader’s perception of existence and events with a carefully chosen cast of words.  It’s not directly revealed that Kate’s partner is a woman, for example.  All pronouns are carefully excised to conceal that Kate is a lesbian.  A pronoun is never used with Kate’s partner Lee.  Even when she drops the tidbit to Al that “Lee buys the coffee”, no pronoun is used.  She lets Hawkins assume the pronoun “he”.  The assumptions and omissions play into a well-crafted concealment of both Kate’s sexual orientation and that Lee is female.

I became more aware of the words used around me and by me, as a result of reading this story.  It wasn’t until I was editing a draft of this review that I noticed how I had initially written “The bodies are discovered along “Tyler’s Road…”.  It was not a conscious decision, but after mulling over how King describes the discovery of Samantha Donaldson’s body, the wording I had used popped out at me.

When the young girl’s body is found at the bottom of a muddy hillside, she is transformed from a frail human child into a “lifeless object” and a “disturbingly small parcel” (Chapter 3).  The choice of words is not meant to sound insensitive.  Rather, it is protection against what the investigators are seeing: the cold, hard reality of a dead child.

And so, King adds another item to the list of found materials at the crime scene.

All packed away into impersonal, plastic evidence bags.

Even when the identity of the culprit becomes clear, it does not detract from mounting tensions.  Readers who relish strong female characters (especially in positions of authority), prefer limited crime scene gore, and crispwriting, will find much to enjoy in this mystery series.