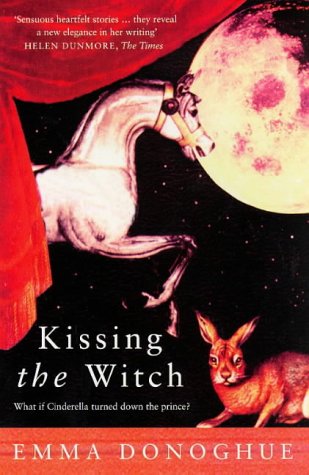 Far too many people often forget the power of a story. Stories change worlds, or particularly they shape worlds, and people. If you don’t believe me, just look at how much Disney has managed to shape the mentality around romance and love for many people of the current generation. And luckily it isn’t only Disney that understands this concept. Emma Donoghue, and her collection of thirteen fairy tales Kissing the Witch, understands the power of a story, such as the one that is weaved through these tales.

It all starts with the Tale of a Shoe and Cinderella and ends with the Tale of a Kiss and a Witch, but these aren’t just thirteen separate fairy tales with a touch of real and positive female relationships. Each one of these tales, from the shoe to the kiss, is threaded together by the women in the stories. In a way this novel actually reminds me of a method that the L Word had used for its third season, interlocking various women through the past and present by bringing up a story at the beginning of each episode and moving from one woman (or guy) to the next. But Kissing the Witch does it with stories instead of events and does it in a way that proves there is always another chapter beyond the happily ever after.

We start this story with a young girl being whisked to a ball after she asked to go. And although she dances with the prince and expects to go with him, things change and instead she finds herself tossing her shoes aside and finding the woman who had brought her to the ball. It doesn’t end there, though: as they are going off together, we are led right into another story and this one is about the godmother before she was off bringing girls to balls. And each story continues one after another, based on one of the characters in the previous one. It eventually got to the point, half way through that I was turning it into a game trying to figure out who would be the next person to tell their story and what tale it might be, especially since it isn’t always clear which tale is a retelling of what!

Like most fairy tale retellings, though, you’d be able to recognize many of these stories if you knew another version of the tale. You’ll find Beauty and Beast, Donkeyskin, Rapunzel, Snow White, and even the Little Mermaid. Now you might also be surprised to find that not all of the stories in this book are lesbian retellings, but they do all have a common mentality.

They are simply stories focused on the power of relationships between women: all relationships. One is the friendship shown between two women (The Tale of the Skin), another focuses on a step mother and her step daughter (The Tale of the Apple), or even a keeper who becomes someone else for the girl she keeps (The Tale of the Hair). Regardless each one of these stories, sensual or supportive, shows the positive sides of relationships that women can share, and if this doesn’t seem like such an interesting and revolutionary idea, then you haven’t read enough fairy tales.

Often times the tales of old try to pit women against women, with the classic step mother and step sisters always being terrible to the girl in cinders, or the witch and queen that curses the young and fair girl that happens to be more beautiful. It is a common occurrence and one of the more unfortunate themes rampant in fairy tales. Instead, Emma Donoghue put the power back in women’s hands with these stories. Each one was not only interesting in the method of not focusing on the prince or husband but in some cases exciting to find out what happens next even though they were already known tales.

It’s usually hard for me to pick favorites with fairy tales, because I find many of them amusing, but in this case I think the ‘Tale of the Hair’ won out finally, due to some blind elements and an interesting narration that focused more on sounds that really got me thinking, and such a well done spin involving the prince in the story.

However, that is just from the retellings, my absolute favorite from this set was actually the last one, told by a witch narrator we know by no other name, ‘The Tale of the Kiss’. As far as I can tell, this was not a fairy tale retelling, but I could be wrong and if I am, I would love to see the original story it was based on. Regardless, this one had a bit more power behind it, possibly because it was original from the author, but it had an interesting focus on the power that people give to each other and to themselves, and most of all it had an open ending. What do I mean?

Well, the thirteen stories don’t just end with The Tale of the Kiss. Much in the same way all the previous stories before it led to a new tale being discussed by one of the characters, this one ends with a direct slant toward the reader continuing the story, essentially indirectly asking the reader what they will do with the knowledge of the stories they just read. I found it a brilliant ending for a collection of interlinked pieces and it really gives me an idea about creating a challenge to have everyone continue the ‘Kissing the Witch’ by creating the next story and the next, and the next.

Anyway, the interconnectivity of this novel was really what set this one majorly apart from other ones I’ve read and gave each tale a little more power. Of course, not all of the pieces were perfect, I actually didn’t particularly care for ‘The Tale of the Bird’ and I had trouble keeping up with ‘The Tale of the Cottage’ because of the narrator’s voice through it, but overall I still enjoyed those stories, they just fell lower on my memorability of them than the others.

Other than that, there really isn’t much of anything to say bad about these fairy tales. The writing style was wonderful and makes me glad I wrote my fairy tale rewritings in first person narrative too and the stories most of all had something to say. You could almost say there was a hidden lesson in each of them, with the last one having a not-so-hidden lesson. Regardless, this is one novel I’d recommend to really anyone, with a particular focus on showing people how it is very possible to portray women with meaningful and positive relationships (and not drama filled ones), lesbian or not, and still have a story to tell.

2 Replies to “Jordan reviews Kissing the Witch by Emma Donoghue”