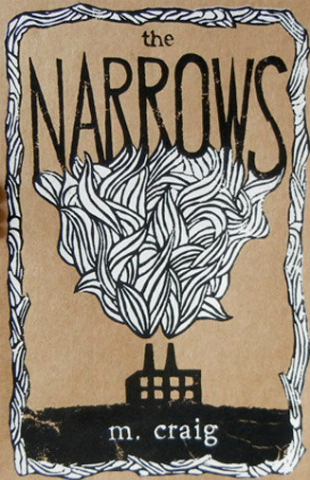 The world of the M. Craig’s The Narrows (http://narrowsthenovel.com/) contains a lot of elements you’ll recognize: full of bicycles and outcasts, skinny jeans and crowded cafes, and of course, a healthy dose of beer, its streets very much resemble a Portland or a Brooklyn of today. Yet then there’s the Other Stuff. There’s dragons and fairies; mysterious names of cities and faraway lands; wars with ogres; wands and swords and black magic–familiar fare for the fantasy junkie. There’s elements of steampunk weaved in, too, with a badass magic-sensing pair of goggles amongst other gadgets, and plenty of abandoned and creepy factories in a very urban setting. All combined together, it creates an atmosphere and story that’s unique and engaging, well crafted and well written. I have to admit that the Brooklyn-But-With-Magic vibe threw me off at first, but perhaps that’s just because I opened this book really not knowing quite what to expect. But the more I got to know the Bikeway Narrows, and the more I got to know the story of our protagonist, Sim, the more I cared about all of it, and the more I wanted to know more.

We meet Sim right after she’s run away from a not-so-pleasant upbringing in the home of the powerful Nogron, stealing an important and mysterious wand in the process. She and the wand are lucky enough to run into a lad named Cader in a train station on her way out of town, and he generously offers her a place to stay in the city of Terresin. Herein we get to know the second most important setting after the cafes and bars in the neighborhood of the Bikeway Narrows, the house where Sim and Cader live along with two other women, Pru and Kai. Between its large, mystical garden, the delicious dinners Kai concocts, and the amount of time Sim spends drinking coffee and reading books inside of it, I wanted to BE in this house. I especially wanted to be next to Pru, a cynical, dark-but-tough woman who becomes a steadfast friend to Sim, especially when it’s revealed that they are both real big lesbians. They especially need to form solidarity as homosexuality is looked upon with scorn and disgust by the majority of society. Yet their friendship is just perfectly that, with the romance in their hearts reserved for others. While Pru spends too much time with too many ladies she doesn’t actually care about–sort of the Shane of Terresin, unkempt short dark hair and all–Sim is over her head entranced by Wood, a local college student who she meets with everyday at their favorite coffeeshop. There’s only one problem: this love is only apparent to Sim. Cue heartache central.

Other minor characters we meet are also essential to the plot: there’s Azzer, the lovably eccentric old dude whom Sim works for, who makes gadgets and fixes bikes, and then there’s a strange girl who Sim keeps running into, who keeps warning her: stay away from the Bikeway Narrows. Along with these ominous warnings, both Azzer and Wood constantly talk of revolution, of injustice, of impending environmental and societal ruin in Terresin and beyond, problems that are easy to parallel to our own imperfect world. Whereas Wood believes change is possible, Azzer rests more on the side of defeat, wondering if they can ever be strong enough to conquer Nogron and those in power. Sim lies somewhere in the middle, unsure of exactly what to feel, but increasingly sure that evil forces are at work, and that they may all be in danger–and perhaps Sim most of all.

What exactly is happening in those factories that border the Narrows? Why exactly is their society at war with the ogres? And what is so special about that wand that Sim was able to steal? And, you know, will there be any lesbian happy endings? While some questions are answered by the end of The Narrows, there’s still plenty left open–and I now, of course, lay in wait for a sequel.

Aside from the story and the writing itself, I must say that the design and cover art of this book is splendid. Small presses can be a mixed bag at times, but I loved the whole look and feel of this novel once I held it in my hands–and it was a further delight when what was inside didn’t disappoint either. My only plea to Miss Craig for a sequel, or if there’s ever a reprint of this one, would be a good map of Terresin, the Narrows, and its environs included at the beginning–because heavens knows I love a sweet map at the beginning of books that invite you into new worlds as this one does. If you’re looking for a different, enjoyable read, this one is definitely recommended.

2 Replies to “Jill Guccini reviews The Narrows by M. Craig”