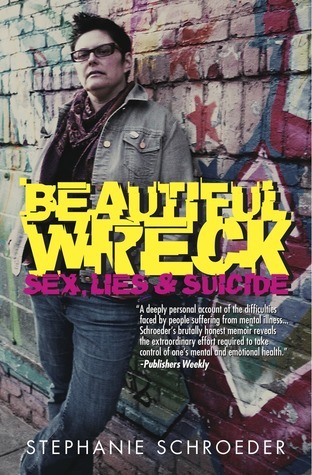 Stephanie Schroeder is a triple suicide survivor. Read that sentence again: triple – suicide – survivor. That is three more than anybody should have to deal with. Her memoir, released last year, takes us through the times that led to those attempts, taking place mainly in and around New York City from the late ‘90s through mid 2000s. The genuine, gritty New York feel of it reminded me a lot of Cheryl B’s My Awesome Place, but everything else about Schroeder’s story is fully her own. And there’s a lot of different parts to this story: being a young queer activist in the city in the ‘90s; struggling to make a living, from working at a shelter on Wards Island to making it in the corporate world; and then journeying on the path of being a writer. But mostly, it’s about juggling a variety of illnesses and depression, including Tourette’s and bipolar disorder, while also becoming attached to a series of toxic women. The most interesting parts of the book for me were her struggles to find therapists and psychiatrists who both treated her with respect and prescribed her appropriate medication. Add on top of this our wonderful American health care and insurance system, and you have quite the mess. When you think about both the love and the abuse that Schroeder experienced in all of her relationships with women, including a really interesting storyline about becoming an unwilling mother with one of her partners, “beautiful wreck” truly is an apt title.

While I found much of this memoir to be incredibly courageous and true–courageous both in how it was written, including dark diary entries verbatim, for instance, and in the fact that Schroeder released it to the world at all–there were a few things I still wished for after I finished it. While I don’t want to deny the anger and bitterness Schroeder felt towards some of her ex-partners, as I think those emotions are actually really important to include in honest portrayals of our lives, I felt that sometimes her romantic dramas overshadowed the importance of her own mental health journey, and the latter was what I really cared about. While I feel people could relate to lots of different things in this book, including the love dramas, it’s the mental health stuff that has the highest potential to be both comforting and instructional to others going through the same thing.

Along those lines, I also felt that the book wrapped itself up way too quickly. Overall this book was a relatively quick read (not in subject matter, but in actual length), which I thought was great, until the very end. She does have this important note in her final chapter (spoilers!), that I feel is way too often ignored in other memoirs: “It seems artificial to wrap up this memoir with a neat little happy-ending bow. I’ve said elsewhere that I’m not sure anyone ever recovers from bipolar disorder, but it is possible to reach a better place.” This is so true. Yet I wanted so many more details about how she got to that at-least-better place herself. And after so many traumatic girlfriends, it seems like she does end up with a healthy relationship, but we don’t get to hear anything about that one but for the briefest mention. Perhaps she wanted this memoir to just focus on the dark days, but as a reader mentally, I really want, or perhaps even need, a balance of the heavy and the light for the journey to really feel worthwhile and to make sense.

Still, the things that Schroeder accomplished even while she was going through personal hell are remarkable, and this book is yet another achievement. It documents things a lot of people in our community have probably gone through, and I would be interested to see what she continues to produce in the future. Find out more about her work at stephanieschroeder.com.