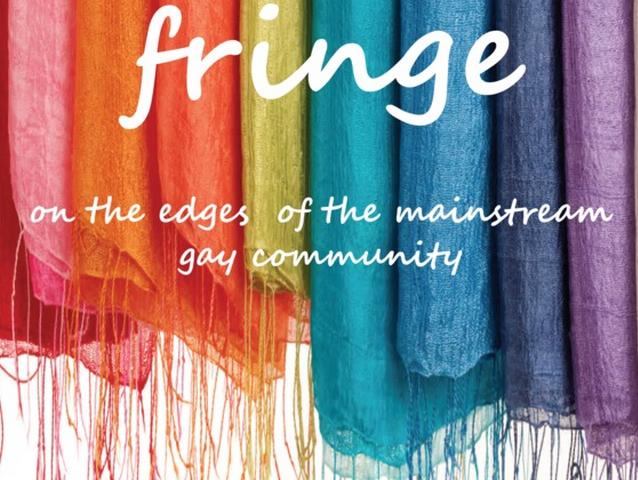 I’d like to take this opportunity to talk in more detail about this new project I’m working on – and how you can potentially be a part of it. The working title for my new book is Fringe: On the Edges of the Mainstream Gay Community, which will explore the experiences of people who exist on the edges of the LGBTQ community. These groups include people who are bisexual, polyamorous, alt-sex/BDSM/kink, disabled, non-White, poor and/or working class, older, trans or genderqueer – groups that don’t get as much attention in the mainstream LGBTQ rights agenda, and who often experience marginalization within the LGBTQ community.

When I say “marginalization,” what do I mean by that? As an example, I recently spoke with Dr. Keely Kolmes, who works with the bi, poly, and kink communities in her psychotherapy practice. Early in her career, when she decided to focus her research and therapeutic skills in this direction, she experienced all sorts of negative reactions – and many of those reactions came from members of the LGBTQ community. “Most of us who are gay aren’t like that,” a gay male professional made a point of saying.  The assumption behind that statement, of course, is that we want to be seen as normal by heterosexuals – not like those “freaks.”

Or take Dany Atkins, who is bisexual and gender-variant, and who has been in a triadic polyamorous relationship for almost two decades. Although she would like to undergo a full gender transition, her disabilities (and, as a result, her fragile health status) preclude her from going on testosterone or undergoing any form of surgery. She had previously been part of a quad relationship, and when the biological mother of their son decided to leave the quad, a fierce and ugly custody battle ensued – with little support from the LGBTQ community. “You got what you deserved,” one lesbian woman told Dany, who was denied any legal rights to her son.

And then there’s Qui510, formerly known as TriQui Di, a vocalist and songwriter hailing from Oakland, California. Her start began in the African American Baptist and Pentecostal churches, singing in the choir that produced the Hawkins Singers (of “Oh Happy Day!” fame).  At the height of her career, Qui510 was signed with a major record label, went on a world tour, and performed with Snoop Dogg, Aaliyah, Natalie Cole, Chaka Khan, and Tony! Toni! Toné! Since 2009, when she came out as a lesbian on her radio show, she’s had difficulty getting even local gigs. “Before, I was on the front page,” Qui510 told me. “Now, I’m an afterthought.”

We could even consider Phyllis Lyon (of Phyllis Lyon/Del Martin fame, the first couple to be legally married in San Francisco and under pre-Proposition 8 California law). If anyone has been a trailblazer in the LGBTQ community, it would be her. Back in the 1950s, Lyon and Martin started the Daughters of Bilitis, the first national lesbian organization in the United States. They helped start the Council on Religion and the Homosexual. They were the first out lesbian members of the National Organization for Women. As they got older, they started the group Old Lesbians Organizing for Change. The San Francisco LGBTQ community is what it is largely because of them. And while Lyon was once front and center in the LGBTQ community, at 88 years old, she now exists on the edges of it. In an ageist culture that celebrates youth, Phyllis Lyon finds little connection in the community she helped build.

That’s what I mean by “marginalization.” It happens within the LGBTQ community – even though we all know what it feels like to be a member of an oppressed group. And that’s why I feel so motivated to write Fringe.

But in order to make this project happen, I need your help.

First, I need to raise money in order to make this project happen. I invite you to take a look at my Fringe Kickstarter campaign, and please consider contributing whatever is possible for you. Also note that with your contribution, you will receive a reward – including a signed copy of Fringe, an opportunity to guest blog here on The Active Voice, or an invite to my book launch party, where many of the people I’ve interviewed for the book (including the three individuals listed above) will be present.

Second, I’m looking for additional people to interview for Fringe. I’ve completed about a half-dozen interviews so far, with another half-dozen lined up in the next few months. If you are a member of an “edge community” within the larger LGBTQ umbrella, I’d be interested in hearing your story. Note that the opportunity to be interviewed is also a reward for contributing to my Kickstarter campaign. If you think your story would be relevant to this project, please contact me at gaylepitman@activevoicepress.com.

Thank you for continuing to read my blog, The Active Voice, and to engage in conversations about my reflections – whether those comments are made on the blog itself, in person, or backchannel via e-mail. These conversations have challenged me to consider issues I hadn’t considered before – and they’ve fueled my excitement for writing and learning more about the community I’m a part of. While I will continue to blog on The Active Voice, I invite you to be a part of this new direction I’m going in.

One Reply to “Guest Post by Gayle Pitman, professor of psychology and women’s studies at Sacramento City College, and blogger at The Active Voice.”