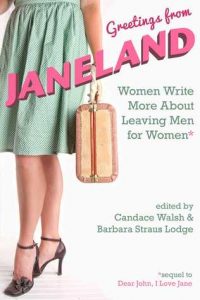 It’s hard to believe that it’s been 6 years since I wrote my review of Dear John: I Love Jane. The Lesbrary was still a baby! In that review, I talk about how fascinated I was with it, namely because of it addressing sexual fluidity. In fact, the author of Sexual Fluidity wrote the foreword, and that inspired me to add it to my TBR. I wouldn’t read for 5 more years–not until I was experiencing my own sexual fluidity. Perhaps it’s a good thing that I waited that long: it was extremely helpful to read at that point in my life (review here).

Needless to say, I had some expectations starting the sequel to that pivotal book. And perhaps those expectations were a little too high. As I sad in my original review, I have a personal interest in those essays where authors address sexual fluidity: having their attractions shift over time. The majority of stories in the first book were not about that. They were about realizing that they were gay later in life, or at least coming to terms with it after having serious relationships with men. That’s even more true in Greetings From Janeland. The focus seems to have shifted to really be representing women who come out later in life. (Later than teenager, I mean.)

These are still interesting stories! They’re about how compulsory heterosexuality can cause people to live decades without owning up to their own desires and pleasure. They show the many different paths that people take to find their truths. They show the ways that their relationships with the men in their lives change: some are still close to them, and some have completely gone separate ways. Some follow up stories from the first book. For the most part, though, they follow a pattern: I was always a lesbian, but I didn’t come out until later. There are a few bisexual writers, but not a lot, and even fewer that address fluidity.

So this collection didn’t cater to my interested quite so closely, but I still think this is a great resource. The editors reference how women have written to them to say how life-changing the first book was for them. We do still have a very rigid idea of what a lesbian looks like, what a queer woman looks like, what coming out looks like. It’s good to have stories that stretch that, and show that it’s never too late to live your truth.

One Reply to “Greetings From Janeland: Women Write More About Leaving Men for Women edited by Candace Walsh and Barbara Straus Lodge”