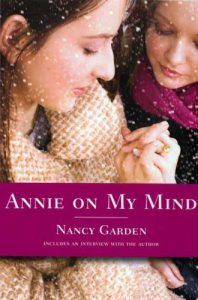 “Have you ever felt really close to someone? So close that you can’t understand why you and the other person have two separate bodies, two separate skins? I think it was Sunday when that feeling began.”

Let me give you a little background on me before I tell you how awesome Annie On My Mind by Nancy Garden really is: I research love and romance in LGBT YA novels. Which means that I read a lot of love stories about gay teenagers. Which really means that I’m a big ol’ sap. A novel with a sweet, compelling love story makes me swoon faster than you can say, “Kiss me.” Which is basically to warn you that this post may contain a large amount of gushing.

The other thing you need to know about my review of Annie On My Mind is that I avoided reading it for, well, a long time. My dismissive thinking went a little something like this: ‘it was published in 1982, two years before I was born! C’mon, it can’t be that exciting now. Really, how good is this “classic” going to be? A YA novel published in the 1980s must have been so censored that reading it will be such a chore—you don’t even get explicit scenes in YA published in 2012!’ (Yes, sometimes my inner monologue does remind me of the teenage characters I read about, but in the spirit of being with you honest with you on the Internet, I was thinking stuff like that.)

Which is why I feel it is so important to admit that I was being a big ol’ AGEIST when it came to actually cracking the spine on my 25th anniversary edition copy.

I want to stand up in front of all you lovely Lesbrary readers, own up to all of scathing prejudice and snarky disbelief, and admit: GIRL, I WAS SO WRONG.

Annie On My Mind is an incredible young adult novel with a sweet, sweet love story. It blows my mind that it was published in 1982—amongst so much fear and misinformation about homosexuality—but it boggles my mind even more that there aren’t MORE YA novels like it published by now.

To set up the story, Liza and Annie meet in the Museum of Modern Art in New York City. Annie is singing her heart out in a deserted wing and Liza, an architectural student, has come to take a look around the museum. They come from different socio-economic backgrounds and very different school situations and yet that does not pose any significant issue to their relationship. The attraction is instant and their friendship builds swiftly.

The major drama of the story revolves around the strict rules and image of Liza’s private school as it is in danger of closing for financial reasons. As you can imagine, all of the students and faculty (hint hint: there are more lesbians than meets the eye) must be on their utmost behaviour during such a funding crisis, i.e. any bad news is all bad news for the school. The other barrier to their relationship is Liza’s coming out process. To be fair, though, I have read much more tortured and dramatic coming out stories. Liza’s, in contrast, feels real in the time it takes for her to accept herself and open herself up—fully—to her relationship with Annie.

I don’t want to give away too many spoilers, but I will say that I was pleasantly surprised by the amount of page space given over to the sexual desires and acts between Liza and Annie. Sure, it’s not explicit sex scenes, but no one can argue that those two seventeen year old girls don’t have a healthy sex life! Some teenagers do have a high sex drive, especially when they fall in deeply in love for the first time, and it was refreshing for me to read that in a YA novel.

When reading it, I do think it is relevant to remember that it was published in the 1980s. Some of the references and ‘ways of life’ are no longer as common today—who has recently pierced their ears with a needle and a potato instead of going down to the mall?!—but the story itself isn’t dated. The relevance of a love story never ages, and this one really does deserve the title of ‘classic.’

Erica is a MPhil/PhD Student researching love and romance in LGBT YA literature. She is currently running an Indiegogo campaign, “Made with Love,” to fund the second year of her program. More info can be found on her website.