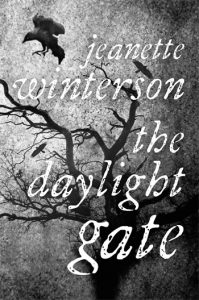 I must first admit that I am new to Jeanette Winterson’s books. Previously, I’ve only read Oranges Are Not The Only Fruit, and I know that she is a well-known lesbian author. Otherwise, I don’t know much. I picked up The Daylight Gate because I wanted to know more, and, as a historical fiction lover, I was drawn to this book, and hoped that it might get me started in the right direction. In the end, I think this book is more of an outlier for her works.

This review contains very mild spoilers, but I have been careful to preserve the twists as much as possible.

The Daylight Gate is a highly fictionalized account of the witch trials in Lancashire, England in 1612. Alice Nutter is a wealthy female landowner, and although no one quite knows her age, she is regarded as beautiful. She is a private person, and mysterious even for those who know her. This novella follows several characters, but ultimately it is about how two young women become involved with each other and with black magic, and how that relationship results in a dungeon full of suspected witches.

When I picked this up, I was imagining something akin to books I’ve read about the Salem witch trials⁠ — innocent people in the wrong place at the wrong time, and unfortunately finding themselves caught up on the wrong side of a rumor. The Daylight Gate is not that. It is the opposite of that. This is a book about black magic, and what happens when two young women become involved in it.

The two young women I mention were previously lovers, and their lives intertwine throughout this book, bringing many surprising twists and unexpected revelations for the reader. I honestly couldn’t predict what was going to happen, and the reader experience while figuring out the twists was one of the best things about this book.

[We] were lovers and we lived as lovers, sharing one bed and one body. I worshipped her. Where I was shy, she was bold, and where I was hesitant, she was sure. I learned life from her and I learned love from her as surely as I learned astrology and mathematics from John Dee and necromancy from Edward Kelley.

Their relationship is never perfect, and I could not bring myself to care about them as a couple even in the beginning. My apathy towards them seemed justified when one eventually turns to black magic, and in a bargain for her soul, sacrifices the other to “the Dark Gentleman”, for him to rape. So… that was a bit startling.

This rape is not the only one in the book. Rape is treated as very commonplace, and occurs or is mentioned in nearly every chapter. While I wouldn’t have minded the griminess and violence of this novella, the constant presence of rape was unsettling in a way that made the book itself unenjoyable for me. There is a young girl who is abused terribly by her family, and particularly by her brother who takes her with him when goes out to “pay for his drink”. I don’t want to talk about this at length, but it is worth noting that the man who rapes this girl most often is later revealed to be her father, which some readers may want to know before choosing to read this book.

Other aspects of this book, while disturbing, are not unbearable, and suit the genre. Horror is meant to illicit a physical response in readers, and this book definitely succeeded in that. The (nonsexual) violence and rather horrific magic made me shudder, which I think is a success in the horror genre.

There is also a general feeling of despair and inevitability throughout the narrative. It feels as though the idea of the “dark ages”, usually applied to the early Middle Ages, has instead been transported to the Renaissance. Everyone is unhappy, dirty, abused, and starving. Which, while that isn’t necessarily untrue of many people during this time period, this book seems to exaggerate in order to create a truly bleak existence. This kind of atmosphere, although it felt inaccurate, was compelling, and I read this book in one sitting.

As for the magic, it is truly thrilling and terrifying. As I stated earlier, I picked this up assuming it would be about innocent people caught in a rumor, and the beginning of this book does lead you to believe that the people involved are ultimately innocent. As the book progresses, however, the amount and shock value of the magic only grows, and definitely helps make this book a page-turner.

This book is a blend of horror and historical fiction, and if that is your cup of tea, you might enjoy it more than I did. While its good qualities do not outweigh the bad for me, it did keep my interest, and it might keep yours, as well.