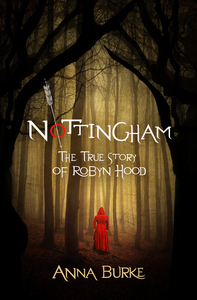 “They will remember when Nottingham’s daughters rose up against you when no one else dared.”

Let’s talk about medieval queer women. Okay, actually, let’s talk about Nottingham by Anna Burke. This is the fourth lesbian Robin Hood retelling I’ve read, and I think this one is my favorite. All of them had some things I liked, and others that I didn’t. Nottingham is no exception. What I loved most about this particular retelling was the effort the author made to represent medieval queer women as they may have really lived and felt.

For me, I feel it’s a disservice to our LGBTQ ancestors to represent them in a contemporary fashion that doesn’t reflect the actual realities of their lives in historical context. I have a hard time with queer historical fiction that invents or overwrites queer history rather than representing it. Of course, other readers may feel that there’s too much sorrow in the past and prefer to read fiction that is more optimistic and uplifting. I get that! I think Anna Burke understands as well, and Nottingham walks a fine line between representing queer history and also providing a positive, hopeful, and mostly believable narrative for these historic and fictional characters.

I have previously researched queer women in the middle ages, and there are several passages that reference specific medieval beliefs and practices concerning homosexuality. It was exciting for me to read those parts and sit up and think, “I know this reference!”

Here’s one familiar reference that I was particularly excited to find:

“[E]veryone knew that women needed stimulation to prevent suffocation of the womb. Unmarried women could seek out a midwife to do the job for them until they could find a husband.”

I loved how much effort Burke put into her research as it relates to queer women in the medieval period. I did feel, however, that it fell slightly short in the overall representation of medieval women on the whole. Often, this book fell into the familiar misconceptions that women were relegated to an upper room to embroider or weave and wait to be sold off into an advantageous marriage. The plot heavily leans on this stereotype of women being helpless chattel and sometimes it acts as the primary influence for character decisions. It was disappointing to find a lack of representation of real historical women, especially when the research into queer history was so apparent. Of course, medieval women were not afforded the same rights that women are today, but they were also respected and powerful persons in their households and in society.

I love talking about history, but let’s talk about the story too!

Nottingham creates a truly original Robin Hood retelling, including some classic scenes, but also incorporates original and exciting content. When we meet Robyn she lives with her brother and sister-in-law in Nottingham. Together they struggle to make ends meet until things take a turn for the worse, and the only way forward in which Robyn can support her family is to turn outlaw. Gathering a group of other outlaws and fugitives, they work together to bring justice to Nottingham.

Robyn’s group is wonderfully queer and full of LGBTQ characters, including Little John, who is a trans man. At first, I was nervous about how the narrative would treat a trans character in a medieval setting, but I found it to be gracefully done and didn’t have any issues with it. It’s so much fun to read about a gang of LGBTQ outlaws fighting against the system! By recasting the story, it gained a little more social relevance in our contemporary world, as well as making for a fun read.

Without spoiling it, I want to add that Robyn’s character is primarily driven by a desire for revenge, and the progression of her goals in this book is excellent. I absolutely loved seeing her grow and develop throughout this book.

Elsewhere in the story, we have Marian, the sheriff’s daughter. As an interesting contrast between our two main characters, Robyn is well-aware that she is a lesbian and very comfortable with her attraction for women, but Marian is the opposite. Her story follows her experiences as she explores her newly recognized attraction to women. Although coming out stories are plentiful in LGBTQ fiction, I think the historical context offered through Marian’s perspective was both interesting and necessary to create a believable medieval social landscape. It might be a difficult read for some as she works through her religious beliefs and internalized shame. This section also includes some self-harm, so please read carefully if that is a difficult topic for you. But fear not! I don’t think it’s a spoiler to say that Marian’s journey does not end in heartache.

In fact, I spent much of the book really rooting for and eagerly awaiting the inevitable meet-cute between Robyn and Marian. I haven’t been as invested in a couple while reading in a long time, and this one was a real pleasure. Their relationship is subtle and takes time to develop, which gave me plenty of time to become truly invested. It was exciting to see them get to know each other and begin working together as the story progressed. It certainly helped matters that I’m a sucker for the trope of a love interest being somehow off-limits to the other, and casting Marian as the sheriff’s daughter provides a special brand of friction and drama that I enjoyed.

If you’re looking for a lesbian retelling of Robin Hood, I can wholeheartedly recommend Nottingham as your very first stop. While I’m disappointed that medieval women as a whole were so harshly stereotyped, the relationships and historically sensitive LGBTQ representation were enough to make me love this book despite a few misgivings. It has earned the number one spot on my list of lesbian Robin Hood retellings.

If you’re interested in reading up on LGBTQ medieval history during Pride Month, check out this resource page on medievalists.net, one of my favorite online resources for medieval history.