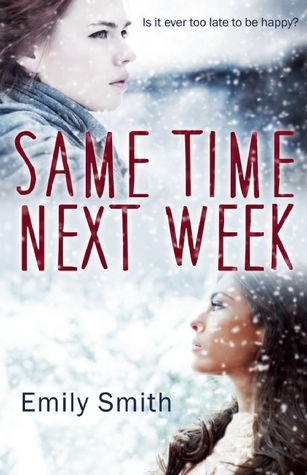 Same Time, Next Week is an incredibly fun novel to read, though not at all what I had in mind. I picked it up because it’s billed as a butch-femme romance. I love romance and I love butch-femme. But I didn’t like this love story or either of the heroines, and I couldn’t get invested in their relationship. Because this is a love story about cheating on your wife.

I knew this going into it. Same Time, Next Week takes a big gamble in the premise, offering a (mostly unconsummated) romance between single Michelle and married Alex. I was a little leary about the affair angle, but I thought it could be interesting. It was definitely engaging. Reading it was like watching bad reality television without the uncomfortable feeling that you’re watching real human beings embarrass themselves. I don’t think that was the intended purpose of this novel, but after I embraced it as a guilty pleasure I couldn’t put it down.

When the novel begins our butch narrator, Alex, is in her late twenties and has been married to Beth, who’s a little younger, for three years. Beth and Alex were long-time friends who married after a brief romance. Hindsight and regret have Alex wondering if she rushed into her marriage and what she should do about it. She’s also feeling stuck in her career, working as essentially a paralegal despite graduating from a prestigious law school at the top of her class and passing the bar. Alex is unhappy with her life, and magically the answer to all her problems arrives when she goes to a crowded lesbian coffee shop one day. Hot, sophisticated, happy Michelle shares Alex’s table, and before they know it, the pair are meeting twice a week at the coffee shop. Alex tells the reader over and over about her guilt, but that doesn’t stop her from complaining to the audience about how Beth fails to measure up to awesome Michelle. Michelle knows from the get-go that Alex is married, but that doesn’t stop her from flirting, asking Alex to be her plus-one at her ex’s wedding, inviting Alex on a Beth-less vacation to Provincetown, having Alex pretend to be her girlfriend in front of a worried relative, and generally playing the perfect alternative to Alex’s boring wife.

Alex has cheated on every pre-Beth girlfriend she ever had and worries that she’ll end up like her own many-times-divorced mother. Though she’s very concerned about leaving her cheating days in the past, she doesn’t seem as concerned with Beth as an actual person with feelings. Alex lists Beth’s faults, but most of them are petty (Beth wears yoga pants all the time!) and/or things that Alex could address just as easily as Beth (we don’t talk, we don’t do anything fun together, we don’t have sex, the house is a mess). Alex doesn’t make any effort to improve her relationship with Beth or even rekindle the friendship they had for years. When Beth and Michelle eventually meet, Alex relishes the passive-aggressive way the women battle over her, which pretty much killed the remaining sympathy I’d had for her. Plus, a big “flaw” of Beth’s is that she’s an Applebee’s waitress, while Alex and Michelle have white-collar careers. Beth is from a more working class background than the other characters, and Alex and Michelle’s classism started making me like Beth better than either of the “love interests.” Also, they make a big deal out of Beth mispronouncing “merlot,” which 1) isn’t even something worth being snobby over, and 2) doesn’t make any sense because Beth is a bartender at Applebee’s and you know people are ordering hella merlot there.

All this would infuriating if these were real people you had to hang out with but Smith’s brisk writing keeps it all pretty fun. Alex’s lack of self-awareness is dazzling, and Michelle seems to be written as though she’s performing an alluring, and effective, act rather than really showing her authentic self. Michelle wants the attention of unavailable women (her ex who broke her heart was apparently a main character in Smith’s previous novel, also a romance about cheating). I kept thinking of the “cool girl” description in Gone Girl whenever Alex mentioned another way Michelle is perfect. Alex repeatedly exclaims that everything that’s hard about marriage would be fine, if only she were married with Michelle, because everything is fun and easy with Michelle. She doesn’t ever consider the possibility that things might be fun and easy with Michelle because it’s new with Michelle, Michelle’s trying to impress her, she doesn’t have any baggage with Michelle, and she hasn’t lived with Michelle for years, etc. The things she doesn’t like about Beth are some of the same reasons she fell for Beth in the first place: Beth is laidback, younger and less intellectual. But it doesn’t occur to Alex that the things she likes about Michelle (ambitious, “cultured,” slightly sarcastic) could grate on her nerves over time too. The self-delusion was fantastic. At points I honestly started to wonder if it was all intentional and Alex was some Nabokov-style unreliable narrator or if Michelle would snap under the weight of her own charade. It was sort of delightful and definitely kept my attention.

There’s also some stuff about Alex’s career, which is ridiculous. Alex goes from not ever really working as a lawyer to being lead on cases and being on a partner track in less than a year. I have a couple of friends who are lawyers (hired at the exact same time Alex couldn’t find a job, after graduating from less prestigious law schools), and just from that, I can say this is not how it works. Alex stops short of blaming Beth for her previously stunted career, but just barely.

This probably makes me sound terrible, but what I liked best about this book was the way it allowed me to indulge in moral superiority and self-righteous judgment. Sometimes that’s a satisfying feeling. The writing is smooth, it’s a fast read, and it’s surprisingly enjoyable. When you feel like being mildly indignant and judging other’s mistakes, skip the clickbait and the reality TV and read Same Time, Next Week instead.

One Reply to “Elinor reviews Same Time, Next Week by Emily Smith”