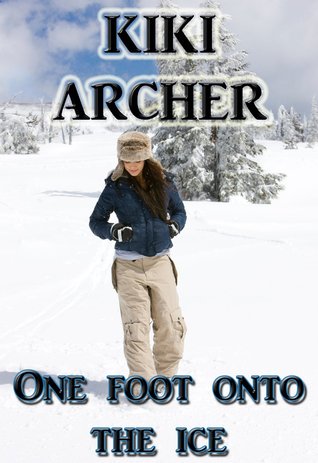 [This review contains some spoilers. -ed.]

Kiki Archer’s lesbian romantic comedy, One Foot Onto the Ice, and its sequel When You Know, are the fun tale of Susan and Jenna. Susan is an uptight teacher at the British boarding school she attended just under a decade ago.  Jenna is her free-spirited former classmate, now a ski instructor in the Alps, who spends most of her off hours hooking up with every woman in her path. One Foot Onto the Ice begins when Susan leads her school’s week-long class ski trip, Jenna turns out to be the ski instructor.  Jenna charms Susan, Susan fascinates Jenna, and it isn’t long before the two are sleeping together and falling in love.  However, Susan’s repulsive coworker, Marcus, believes he and Susan are heading toward a relationship and that Jenna has conned Susan into sex. Marcus sets out to wake Susan up to Jenna’s supposed lesbian trickery.  Jenna’s recent fling, Amber, would like to be more and stirs up plenty of trouble for the couple as well.  The students, ages eleven through eighteen, provide some entertaining and interesting subplots.

When You Know is what happens in the months that follow that whirlwind fling, with Jenna and Susan attempting to build a relationship despite being in different countries, having dramatically different social lives, and being pretty new at the whole serious girlfriend thing.  Their efforts adjusting to the relationship, and the resolution the sequel provides around secondary characters like Marcus, ties up the loose ends of the first book nicely.  This book also deals with social media use and the problems it can cause.  By the end, When You Know finally gets our heroines living in the same place, with compatible lives, and both characters are a bit more mature.  Reading the sequel resolved most of the few concerns I had about its predecessor, which is one of the best things a sequel can do.

These books are campy, full of slapstick, and made me laugh.  They are mostly light, and easy and fast reads.  I enjoyed them a lot.  Archer manages to show Jenna and Susan’s chemistry through delightful banter.  While it indulged in some clichés, Archer made these forgivable.  Yes, Jenna and Susan are in love and in a “committed” relationship after less than a week, with Jenna making some major life changes because of it.  Yes, Jenna goes from having sex half the women on the mountain to dedicating herself to monogamy with Susan at breakneck speed. But they’re also twenty-six, both inexperienced in relationships, and caught up in powerful feelings and an exciting connection.  They also both have flaws in their judgment, with Susan incorrectly convinced in both books—despite all evidence—that Marcus is harmless, and Jenna oblivious to the possibility that her instant-romance with Susan might tick Amber off or, in the sequel, that going out drinking until 5 a.m. on her first night away from her brand new girlfriend could stir up Susan’s insecurities.  These hints at naivety make it more realistic that they could jump into a “serious” relationship after a couple of days.  Susan voices some reasonable doubts in the second book, which helps too.  I’m not sold on their relationship being an easy one in the future, but I was thoroughly convinced that people might behave like they did and feel the way they felt.

I was less convinced of Susan’s innate sexual prowess and quick adjustment to her new lesbian identity.  Susan had very little sexual experience, none with women, and was not even aware of her attraction to women until Jenna entered the picture.  She goes from considering Marcus as her best romantic option to being comfortable as Jenna’s girlfriend exceptionally quickly, with no exploration of whether she’d ever had feelings for women before or whether she’d ever been attracted to men either.  She and Jenna have mind-blowing sex almost as soon as they attempt it (though this is preceded by an endearingly awkward scene of Susan trying to rid herself of pubic hair as soon as she sees Jenna naked, with disastrous consequences). The sex scenes are pretty hot but sometimes a little over the top.

It is a romance though, and a very entertaining one at that, so I’ll grant it leeway. I recommend these books to anyone interested in lesbian romance.  The books are best together, and as a pair they make one of the most fun lesbian romantic comedies I’ve read.