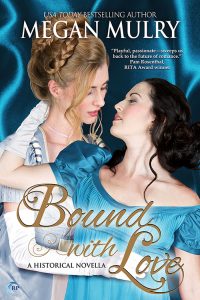 Bound By Love is a Regency era novella about Vanessa and Nora, women who have been together for twenty years. They’ve raised Vanessa’s children from a previous marriage and built a happy life together in the English countryside. Then Nora learns that her daughter, who she believed was stillborn just before she met Vanessa, may in fact be living nearby–and that Vanessa may have known there was a possibility Nora’s daughter was alive all along.

This is such an interesting set up for a story! It starts off strong, with alternating chapters in 1810 and in 1790, when Vanessa helped rescue Nora from her abusive husband and the two women fell in love. I’m not a huge Regency person but I thought the tone was fairly on point. I liked having a long term couple at the center of the story. Megan Mulry’s imagined pansexual, kink- and poly-friendly Regency England is charming.

Unfortunately, the tension wasn’t allowed to build enough, so the emotional pay off was limited. Even very serious issues are resolved quickly and without much lingering impact. I wanted the story to dive deeper, especially when Nora meets her possible daughter. Some problems seemed tacked on, which was unnecessary considering the potential for conflict and emotion provided by the premise. I had fun reading this, but in the end it seemed more like a draft than a finished novella.

This book is the second in a series of queer Regency romances by Mulry, which include kink, poly relationships, and which all connect. The final section of this book is the lead in for the next in the series and didn’t tie into the central plot all that well. If you have been longing for queer Regency, you might like to explore the series, especially if you just want a light romp. As a stand alone book, though, this didn’t impress me too much. Hardcore f/f Regency fans might want to check it out, but you’re not missing much if you skip it. Two out of five stars.