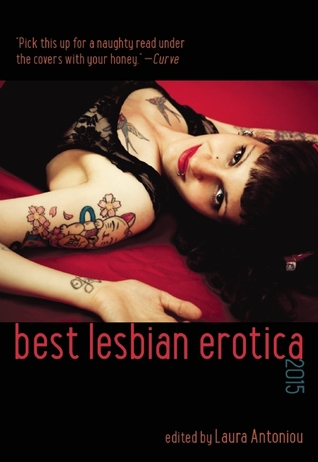 This collection takes us to other times and places too. “Lovely Lady Liberty” is a delightful romp in the middle of World War II. “Arachne” reimagines a Greek myth as erotica with surprisingly great results. “The Bullwhip and the Bull Rider” seems like it’s from another time, though it’s not explicitly, and it actually made the rodeo sound sexy–a compliment that should be taken seriously since I grew up in small-town Idaho and the memory of rodeos, with their hay-and-manure smells, still makes my nose twitch.

There’s a wide range of characters and sexual expression in this book. There’s plenty of kinky and vanilla adventures alike, and characters of many races, gender presentations, and different ages. With authors like Sacchi Green, Xan West, Miel Rose, BD Swain and many, many others, there is a ton to savor in this collection.

That being said, this anthology felt uneven. Rarely will anyone like every story in an anthology, but the high quality writing in the best pieces made the less polished stories a let down. Some, like “Late Show,” tried to pack in way too much relationship angst and sudden commitment in a short erotica piece. “Girlz in the Mist,” on the other hand, presented an intriguing premise but the sex scene read like a blase recitation of acts without desire or pleasure, with a narrator who is “tolerating her own violation.” Despite an interesting set up at an all-female bath house, ultimately it reminded me of the bland girl-on-girl erotica you find written for a male audience. Worse was “Kristie’s Game,” in which a rough consensual hook up between strangers turns disturbing when one woman physically overpowers the other and threatens to penetrate her while the physically weaker woman says “no” repeatedly. The reader is told she’s afraid, but the sex scene doesn’t stop and in the end we’re told this behavior is a habit for the stronger woman. I felt incredibly frustrated because this story could have been consensual with a brief conversation early in the hookup to determine safe words, providing a clear line between playing with power and actual fear of rape. There was no need to include the threat of rape, which it should go without saying I do not expect from the erotica I read. This story also had a notable spelling mistake and a few very clunky phrases, giving the impression that it had not been edited.

I do recommend this book, but please skip “Kristie’s Game.” It’s unfortunate that this is included in an otherwise great, if not flawless, erotica anthology.