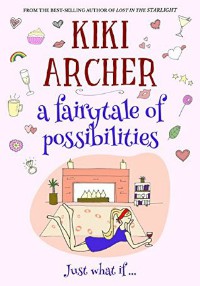 British wedding planner Lauren is in the business of making dreams come true for other people. But in her own life she’s been pining over her straight best friend Rachel since they were teenaged university students together. In their eleven years of friendship, Lauren has drifted from girlfriend to girlfriend every several months while nursing her secret crush. Rachel, meanwhile, married the boyfriend she met at university, had a son and became a stay at home mom, and was widowed. It’s been two years since her husband died and Rachel decides she’s ready to get back out there–possibly with women. After so many years of fantasizing, though, making Lauren’s dreams real isn’t as easy as the fairytale she’s had in mind.

Lauren and Rachel’s friendship is full of banter and flirtation from the first pages of the novel and has the shared language of long-time friends. The pair’s conversations hooked me and are just plain fun to read. It made sense to me that Lauren didn’t want to risk a friendship that fulfilled her in so many ways by making advances she thought would be rejected. It also made sense that Rachel had more complicated feelings for her friend than she’d previously explored.

The characters shine in this book. I really appreciated that Rachel’s son Parker behaved like an actual kid. Writing children can be tough and I’ve read a few romance novels featuring single moms in which the kids are placeholders. Not so here. Parker is his own character. Plus Lauren has her own loving relationship with Parker, another thing she doesn’t want to risk. Rachel is a devoted mom doing the right things: taking her son to a grief support group, keeping him connected to her in-laws, trying to determine what’s best for him as she considers what she wants. Other highlights include Lauren’s ridiculous, but ultimately helpful, assistant Trudy, and Lauren’s absurd clients, whose relationships offer some unexpected lessons in love. Though Rachel’s pestering brother-in-law is a cartoonish antagonist and could be much more nuanced, he keeps the story moving along.

The obstacles in the way of the relationship develop, and are resolved, organically. Lauren’s competitiveness and Rachel’s conflict avoidance pop up throughout, so when these cause problems, it makes sense.  I appreciated that Rachel doesn’t have an identity crisis about her interest in women and that it’s Lauren’s idealizing that throws many a wrench in things. I also liked that Rachel’s late husband isn’t an afterthought, and he and his accidental death have an impact throughout the novel. Near the end this involves a pretty intense conversation that neither main character handles well. I thought this made sense and that a romance involving a relatively recent widow is going to have some painful moments. Also, a friendship as intertwined as Lauren and Rachel’s will have clashing perspectives and hidden fears about shared grief. It might be heavier than some readers want, though, especially because the rest of the book is quite light and at times pretty silly. I liked the angst near the end but if you don’t want that, skim this conversation and skip ahead a bit.