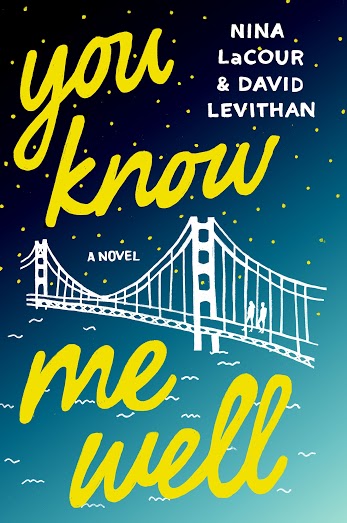 This book is a romp. Ever since I read Boy Meets Boy, I’ve been looking for a queer women’s equivalent: a cotton candy book that, despite any issues it addresses, fills you with a sense of hope, warmth, and happiness. This book seems to do the trick quite nicely, and it’s no surprise that it’s cowritten by David Levithan himself (though I now have to seek out Nina LaCour’s Everything Leads To You, because if it’s anything like this, it’s a must-read.)

You Know Me Well is told in alternating chapters. Mark is head-over-heels for his best friend, but despite the fact that they’ve been fooling around for years, he still can’t seem to get them in the “relationship” category. Meanwhile, Kate has fallen in love with a girl she’s never met, and is terrified at the chance of actually meeting this mystical, circus traveler, dream girl. They’re both in a topsy-turvy point in their lives when they bump into each other in a bar during Pride. They’ve seen each other at school before, but after this chance meeting, they become the other’s main source of support and guidance for this pivot point in their lives.

The book unfolds in only a week or so, but it’s a week that causes them both to reconsider their lives’ trajectory. They are finding themselves, deciding their priorities, considering whether they want to be whole new people. Having someone new–someone who understands and is also not invested in them staying the same–is hugely affirming for both of them. This is a story celebrating queer friendship, and that’s what is at the heart of it. That’s what makes me want to hug this book. In addition to the main characters, there are many queer minor characters (though, sadly they are [almost?] all white, and there’s not a lot of trans representation).

If you’ve been craving a fluffy read, this one will definitely hit the spot. I think it would be perfect to give to a teenager just coming out as gay or lesbian, because it so hopeful, and it celebrates the queer community. I’m really glad that this book is out there, and I hope that it finds its way into the hands of the people who could use it most.