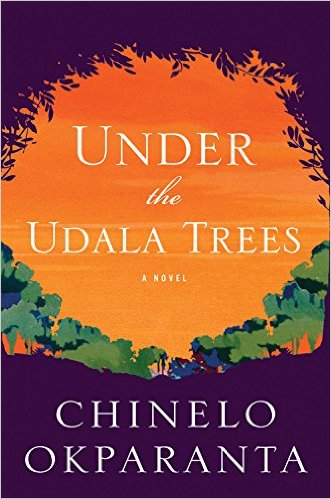 Under the Udala Trees is set in Nigeria during and in the aftermath of the civil war. Ijeoma is sent to live in a safer area of the country with people she’s never meant. She acts as a servant to earn her keep. When she befriends a girl from another ethnic group–in fact, from the community on the other side of the war–this relationship is only barely tolerated. When it’s discovered that her and Amina’s relationship has changed into a romance, Ijeoma’s life is irrevocably changed.

This is not a light read. Under the Udala Trees deals both with living through war and dealing with brutal homophobia. In fact, these two types of violence get intertwined. We first meet Ijeoma in her childhood, when she lived with her mother and father. We see how war devastates her family and eventually takes her father from them. This is just the precursor to her later struggles with a culture and family that refuses to allow her to be an authentic version of herself. Her mother stresses the importance of marriage and makes her study the Bible daily, stressing any passages that can be interpreted as forbidding same sex relationships.

What I found especially difficult was how much Ijeoma internalized this messages even when didn’t consciously believe them. She questions how the Bible is being interpreted and doesn’t see how her actions or feelings could be sinful, but she still feels guilt and doubt. That is the damage a hateful statement repeated over and over can do. She ends up feeling the best parts of love and intimacy juxtaposed with shame and self-consciousness.

This does feel like a bleak read through most of the book. Ijeoma does not have a lot of options available to her, not just as a lesbian, but as a woman–and an unmarried one at that. Every choice that she makes seems to come with awful consequences. I don’t think I’ll be able to forget the scene where she and other gay friends hide in a bunker left over from the war in order to avoid a crowd intent on punishing or even killing any queer people that they find. It shows how much Ijeoma is still living within her own war.

I’ll admit that my first impression when I read this book was that it felt like a coming out story from earlier decades, mostly because the extreme backlash as well as the way the plot is mostly centered around her sexuality. But I had to reexamine that reaction when I got to the brief author’s note, which explains that in 2014 Nigeria criminalized same-sex relationships, and that Nigeria is the second most religious country in the world. With that context, the story line makes a lot more sense, and it reminded me that although I am lucky enough to live in a community that is fairly accepting of queer people, my situation is not universal. For many people, that backlash is the reality of their coming out, and these stories are therefore needed just as much now as they were in earlier decades. This is why we need more stories of the queer experience from a global viewpoint, and Under the Udala Trees is a necessary step forward down that path.