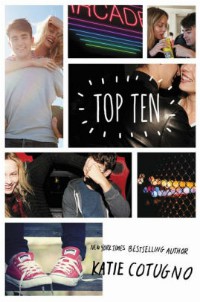 I’ll get this out of the way first: Top Ten is about Gabby and Ryan: their unexpected friendship, and their constant will-they, won’t-they. It starts on the night of their graduation, when their complex friendship gains a whole other complication, and then describes the “top ten” moments of their friendship, not in chronological order. This is about the two of them, and there is a romantic component, but Gabby is bisexual, and just as much time is given to her long-term relationship with Shay, her girlfriend, as there is to the M/F relationship. (There’s not really a love triangle, and there’s no cheating, these are just relationships at different points.) So this isn’t a F/F romance (though it does include one), but it is queer.

On to the story itself. I enjoy reading about complex friendships, and Gabby and Ryan definitely have that. We see their friendship from both perspectives, and they both clearly rely on each and value each other, but there is also a lot of other things going on. Their insecurities get mapped onto the other. They don’t always know how to communicate with each other. Their conversations can go sideways and explode into serious fights–they’re so invested that can’t always get the perspective they need. They’re both insecure and are subconsciously looking for slights. And they both have their own issues: Gabby struggles with her anxiety, and Ryan keeps getting concussed playing hockey (but feels like hockey is his only possible future). Their interplay is sometimes frustrating, but relateable. They often confront each other on things no one else will bring up, but they still don’t always address the things that most need talking about.

I was a little bit worried that because the book focuses on Gabby and Ryan’s relationship, Gabby and Shay’s relationship would be seen as second-best, doomed, or trivial. Instead, we get a really cute scene of them meeting and getting together, and I did like their relationship. Although it’s not the focus of the story, they get enough space to develop a dynamic, and the difficulties that come up have nothing to do with Ryan. So I appreciated that it wasn’t as if the F/F relationship was a stepping stone to the ~important relationship. It was developed and significant in itself.

As for the structure of the story, it was interesting, but I’m not sure it really worked for me. For one thing, I already have difficulty keeping track of time, so scrambling the events made it difficult. It also made it harder to connect to the characters, because I didn’t get a great sense of their change over time. Sometimes I was actually confused, like when one chapter would refer to a previous fight, and I couldn’t remember if that was something I’d already read about or not. (Listening to this as an audiobook probably didn’t help that.) Perhaps partially because of that, although I was interested in Gabby and Ryan’s dynamic, I didn’t feel really connected to either of them individually. I was losing track of things, like the ages of Gabby’s sisters, which made scenes with them difficult to understand. the motif of Buzzfeed-style lists was mentioned a few times, but it didn’t seem like a strong enough theme to frame the whole book around. Although I liked elements of this, unfortunately I didn’t connect as much as I wanted to.