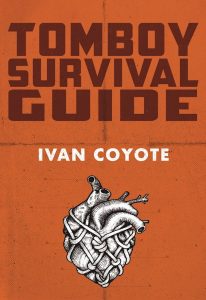 “I was not ladylike, nor was I manly. I was something else altogether. There were so many different ways to be beautiful.”

– Michael Cunningham, A Home at the Edge of the World, epigraph to Tomboy Survival Guide

First of all, this is a beautiful book just as an object. I love the cover, and there are lots of small details that really add to the design, including the back cover edge being usable as a ruler. Throughout the book, between essays, are diagrams, including a disassembled stand mixer, knot-tying, and pastry-making.

I love Ivan Coyote’s writing because it’s both easy to read and deeply moving. Most of their stories come out of a rural setting, often up north, and they combine that often harsh environment with a kindness and generosity that underlies all their words. In one story, they talk about being one of only two people in a trades class that wasn’t a cis guy, and the harassment they faced. One day, they came in to find that someone had pissed in their toolbox. They cleaned it before class so no one would see them flinch at this.

This conviction to remain kind even in a cruel world is inspiring to read. It’s not laid out as a philosophy; it’s just apparent behind every story. In one essay, they talk about forgiving their mother for “squeezing” them into things, recognizing that what they read as shame for all those years was actually fear–and wishing that their mother had named it then.

Once I came out, I stayed out. I got a regrettable pink triangle tattoo on my shoulder and plastered Queer Nation stickers on my leather jacket and went to kiss-in protests at the old coffee shop on Commercial Drive. I wanted to fight homophobia everywhere, in everyone. I wanted to Act Up, to act out, to have sit-ins, and not stand for it anymore.

I wish now I has been kinder to my mother about it all.

Ellen moved into a big house in East Vancouver and started to date a guy who played trombone in her jazz quintet. I told her I couldn’t spend too much time with her and all her straight friends anymore lest I by homogenized by their infectious heterosexuality. My politics didn’t leave anyone, including me, a lot of room for nuance, or grey areas.

I wish I had been kinder to a lot of people about it all, come to think of it.

Queer and trans people are often depicted in media as being perpetually teenagers or twenty-somethings. That’s another reason that I appreciate Ivan Coyote’s place in queer lit. They are in their 40s, which means both that they offer a look into a possible queer future for ourselves (it’s hard to imagine your future when none are depicted in media) and that they offer a more nuanced view of queer politics.

One essay that really stood out to me talked about the response they got from their Slate piece about gender neutral bathrooms, and about the harassment they face in public bathrooms. Their piece got shared at the same time on two sites: one, a pray-away-the-gay site, and the other, a “radical feminist” anti-trans site. The odd thing, they said, was how difficult it was to tell from the hateful emails which site the person was from. These are supposed to extreme opposite ends of the political spectrum, and yet the “radical feminists” and ultra right-wing camp sound almost identical. There is an unfortunate amount of TERFs (trans-exclusionary/trans-exterminatory “radical feminists”) on tumblr, and I’m constantly stumbling on their posts and remarking at how conservative their stances are, with minor vocabulary changes.

Of course, as the title would suggest, most of this collection has to do with gender.

But my day-to-day struggles are not so much between me and my body. I am not trapped in the wrong body; I am trapped in a world that makes very little space for bodies like mine. I live in a world where public washrooms are a battle ground, where politicians can stand up and be applauded for putting forth an amendment barring me from choosing which gendered bathroom I belong in. I live in a world where my trans sisters are routinely murdered without consequence or justice. I live in a world where trans youth get kicked out onto the street by their parents who think their God is standing behind them as they close their front doors on their own children. Going to the beach is an act of bravery for me. None of this is a battle between me and my own flesh. For me to be free, it is the world that has to change, not trans people.

I think this would be an excellent book to give both trans/butch/gender-nonconforming people, especially teenagers, but also to give to someone who wants to learn about trans politics and lives, but doesn’t know where to start. Coyote is generous and forgiving in their writing, and despite the almost endless opportunities to respond to a situation with rage, there is very little anger in this book.

Basically, I can’t recommend Ivan Coyote’s writing highly enough, and Tomboy Survival Guide is a superb example of it.