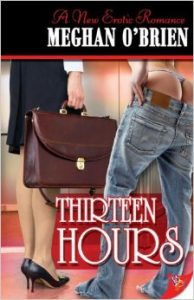 There’s a useful term they use on Book Riot: “genre kryptonite“. It describes those tropes that immediately make you want to pick up a book. The buzzwords that leave you helpless to add a book to your TBR. For me, one of my genre kryptonites is enclosed spaces. I’m not sure why (claustrophilia?), but any story that has characters trapped together in an enclosed space piques my interest. So when I heard about a lesbian erotica novel that had two character trapped in an elevator together for 13 hours, I knew I was going to read it eventually (even though I don’t usually gravitate towards erotica).

This book was both better and worse than I was expecting. From the first few pages, I knew I wouldn’t be rating this book highly. I knew that part of the tension of Thirteen Hours was that the two women didn’t get along before they got stuck in the elevator. What I wasn’t expecting was the instant loathing that I had for one of the main characters. Dana is working at her office when she is surprised by a stripper, who has apparently been hired by a coworker for her without her knowledge. Obviously it’s fair that Dana feels super uncomfortable and even angry about this. But she reacts by being over-the-top cruel and insulting to this woman, including saying that she’s afraid she’ll “catch something” from her.

I realize that this was supposed to be the basis of their dynamic when they get stuck in the elevator, but I was so immediately sympathetic to Laurel (the stripper) and repulsed by Dana that I couldn’t understand why Laurel was so understanding about it. She seems to think that her defending herself and reacting to Dana’s insults is just as bad as Dana’s spontaneous vitriol.

On top of not liking their romance, I found the elevator scene to be less engaging than I was expecting. It was basically just them chatting, getting to know each other. And then playing truth or dare (and, obviously, sexy shenanigans follow).

Unfortunately, the underlying disgust with sex work that permeates this book really detracts from its strong moments. Laurel does defend herself and stripping, but she does so by distancing herself from “hookers”. And despite her defense of other women who strip, she quits that job to make Dana happy.

So although I actually quite liked their relationship together post-elevator, this wouldn’t be a title I would recommend (even if it’s your genre kryptonite, too).