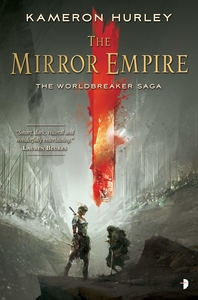 The Worldbreaker Saga is a brutal, brilliant series. It is emphatically queer: it examines gender and sexuality from multiple angles, polyamorous configurations of genders are the norm for relationships, there are multiple non-binary point of view characters, and the main character is attracted to women. It boasts a huge cast of point of view characters and an ever-expanding setting made up of distinct, detailed cultures. It is complex and ambitious, and it challenged me at every turn. This is grimdark epic fantasy, so it’s far from a comfortable read–but it’s so very worth it.

This is a three volume, 1500+ page story, so I have a lot of thoughts on it. Most of them are general, but I’ll be addressing the second and third volumes at the end, so there will be spoilers there. There will also be a paragraph of content warnings (that is likely incomplete–did I mention it’s grimdark?) near the end. I do want to say that although there is a lot of dark and possibly triggering content, it’s not done in a gross-out, over-the-top way. Kameron Hurley has studied war and conflict, and has her Master’s in studying resistance movements, so the books portray war as it is: messy, brutal, humiliating, and endless. It resists neat and tidy tropes about saviours and righteous battles. But it isn’t done to be edgy or nihilistic: it supports the overall message of the messiness of being human, and how much we are shaped by our circumstances. With those caveats out of the way, let’s get into it.

When I began The Mirror Empire, I was properly intimidated. Every reader brings different perspectives to a book; I bring a faulty memory and an inability to visualize, which makes epic fantasy a difficult genre for me. In fact, my struggle to get started with this book inspired me to make a video about my Reader’s Achilles Heel. I also have difficulty remembering names, so having a lot of POVs (at least 8 in first volume, and more as the series goes on) is a challenge. My strategy is to just let it wash over me, accepting that I will be lost and will miss some things, but hopefully I’ll get my feet under me at some point. It speaks to the strength of The Worldbreaker Saga that despite the overwhelming amount of names and information, I was compelled to keep reading. Imagine my shock when I neared the end of the book and discovered there is a glossary. A glossary of terms and place names and people’s names and who they’re related to! Please, save yourself the unneeded anguish that I went through and bookmark that right away. Reading when a lot more smoothly when I realized I could refer back to it! (There are glossaries in each volume.)

It’s no wonder that this series is 1500+ pages and includes so many points of view: it tackles complex, multilayered, big ideas. There is a philosophical underpinning to the story that makes it truly memorable. I’ll discuss this more in the paragraphs addressing Empire Ascendant and The Broken Heavens, but suffice to say that I genuinely came away from this with more empathy for other human beings. Who would we be in different circumstances? If we made different choices? This saga offers its own difficult answers to these questions.

The worldbuilding in this series is overwhelming. From the magic system to the landscape to each culture included, each detail made me want to know more. In this world, there are three suns, and three satellites. Magic users are each associated with one of these satellites, and their powers ebb and flow depending on whether their satellite is ascendant or descendant–so someone might spend a decade being the most powerful magic user in the world, only to spend the rest of their lives hardly able to do the simplest effect.

This series covers a lot of land–the second book begins with an expanded version of the first volume’s map. The forests are filled with monstrous plants: poisonous creeping vines, deadly walking trees, and even plants that can swallow you whole. When travelling, an area must be burned to camp out on, and that perimeter must be guarded. People ride giant dogs, or bears with forked tongues and bifurcated paws.

Each area has distinct cultures, attitudes, and histories. The Dhai think Saiduans are rude, because  they don’t ask for consent to touch others. The Dhai are seen as hopelessly out of touch, performing time-consuming rituals and refusing to engage in warfare. The Dorinah have ruthless women soldiers who treat their husbands little better than they treat their Dhai slaves. And this doesn’t touch on the Tordins or Aaldians–or the “mirror versions” of each. We begin the novel with Lillia fleeing from Dhai soldiers as a child, sent across a gap between the universes by her mother, only to be taken in by this world’s Dhai–a pacifist group.

For me, I think a fantasy world has been established well when a fantastical event–with no real-world counterpart–is viscerally affecting. In His Dark Materials (spoilers for that series), it’s the moment when daemons are cut away from their person. Despite there being nothing to compare that to in real life, it is horrifying to read, because that bond has been so well-established that it feels real and natural. In Harry Potter, it may be the moment a wand is snapped. I knew the worldbuilding in The Worldbreaker Saga had worked on me when a fantastical event was truly shocking to me. I think I actually gasped.

But, of course, I am writing this on the Lesbrary, so it wouldn’t be right to talk about worldbuilding without addressing how queer this world is. Each culture has its own relationship to gender. I mentioned Dorinah’s approach to gender, and the (more familiar) reverse of that is in Tordin. The Dhai have 5 different pronouns, which are freely chosen. Saiduans have three sexes, and use ze pronouns as well as he and she. One character (who also happens to be immortal and self-healing) changes sex periodically–unwillingly. There are multiple non-binary characters, and a side character who uses they/them pronouns. As I mentioned, polyamory seems to be the norm, with different combinations of genders in each configuration. (This also brings different definitions of family, including “near-cousins”.) There isn’t a lot of sex included, but there are m/f, m/m, and f/f sex scenes. Although there are tons of characters, Lillia is the main character. She has a… complex relationship with another woman, Gian. Don’t expect a fluffy romance, but Lillia is definitely attracted to women.

Speaking of Lillia, it’s the Worldbreaker Saga’s complex, multifaceted characters that first pulled me in. As I mentioned, there are a ton of POV characters. Lillia is disabled and has asthma, and she begins are the hero of the story. I kept being eager to get back to her chapters, only to become disenchanted with her fairly early on. I was frustrated that I didn’t like her as much anymore. As the story continued, I realized that every person included is deeply flawed. Some of the POV characters are even villainous or monstrous at times–but they’re never one-dimensional. Zezilli is a Dorinah solider, and Anavha is her slim, gold-adorned, compliant husband waiting at home: “He was the one thing in her life she controlled completely.” She won’t allow him to read or socialize. We get POVs from both characters, and it’s difficult at times to be in her head. She is part-Dhai, and she participates–in fact, helps to lead–the genocide of Dhai in Dorinah. Meanwhile, Anavha is completely broken down by his situation, and struggles to know how to feel about Zezilli. Good characters make bad choices, horrific characters become relatable–this story doesn’t let you get comfortable with easy judgments. (Also, I have no neat place to put this, but there is also a nonverbal side character who uses limited sign language.)

The Worldbreaker saga is an ambitious, far-reaching, complex, and deeply thoughtful story. Despite being overwhelmed by it at first, I loved it by the end. It leaves me with so much to think about, and although it took me a while to get through it in the first place, I’m already eyeing it up to reread. If you want a book that will challenge you and leave you thinking well after reading it, I highly recommend this one.

An incomplete list of content warnings for the series: genocide, gore, murder, slavery (including being sold into prostitution at 14), rape (described), torture, cutting, disordered eating, and cannibalism (ritual/mourning).

Empire Ascendant takes the worldbuilding established in The Mirror Empire and expands it. It begins with a bigger map, and adds more characters, countries, and cultures. A layer of complexity is added by beginning to really explore the intrusion of multiple parallel worlds. The concept that people can only travel to another world if their parallel self is dead is an interesting plot point, adding both limitations and danger–your other world self is likely to want you killed. The “mirror” version of Kirana is interesting–she is a warlord and ruthless, but her motivation is to save her family. (And we get another f/f couple!) This is also when we start to see the real arc of Lillia, which I find fascinating. Is she a saviour? A villain? She has been completely broken down by her life and emerged different. Fundamentally, she is the most persevering, survivalist character I’ve ever read.

The Broken Heavens delves more into the questions raised in Empire Ascendant: how related are you to your “mirror” selves? Who would you be if raised in a different world? One world has warlike Dhai, while one has pacifist Dhai. How could they have gone in such different directions? Lillia has continued on her journey, becoming more hardened. After so much time and so many pages have gone by, it’s very satisfying to have characters come back together, especially when their stories have gone in different directions for a long time. By this volume, I realized that I had kind of come to love and relate to these terrible people. After spending so much time in their heads, I could understand them, even if I would hate them in real life. I enjoyed both previous volumes, but I liked that this one added the element of a kind of prophecy: who is the worldbreaker, key, and guide? What happens when they meet? I don’t want to spoil it, but I will say that I found it a very satisfying ending. I thought that the story had to end one way to stay true to Lilia’s character arc, and another to be satisfying for the plot, but it managed to do both. (I did wonder what happened to one character, but that’s a pretty minor complaint.) This delivered on being an epic story, and the ending managed to live up to everything that came before it.