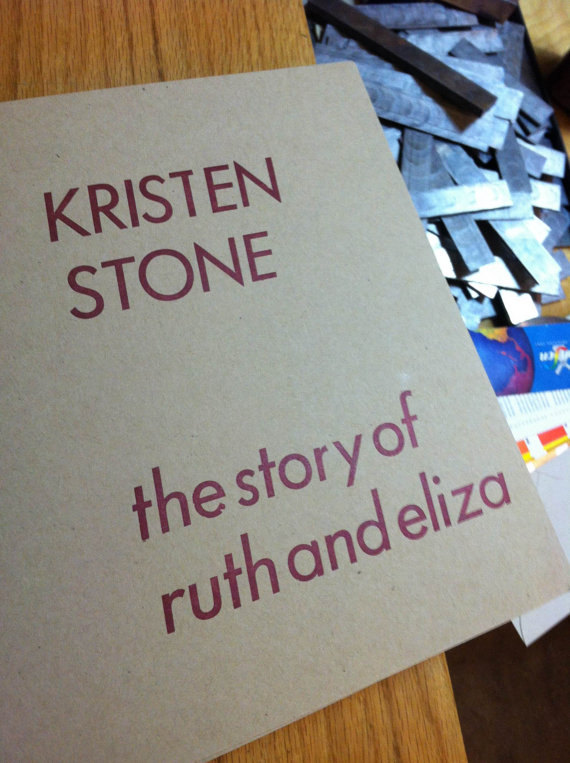 The Story of Ruth and Eliza is a novella (or lengthy short story?) that revolves around two characters: Ruth, a witch, and Eliza, a nurse. The story is told in many small sections, some several pages long and some only a few lines. Each is titled, and though they are written in prose, they seem to act like poems. Stone definitely bring a poetic element into the story, and so many of the lines seem as carefully chosen and evocative  as poetry. Ruth and Eliza meet in a sign language class, and they are brought closer by working on a group project together. Ruth is lonely, and envies Eliza’s home, which is filled with the presence of her children and husband. They are both drawn to each other, but this isn’t exactly a love story.

I instantly fell in love with Kristen Stone’s voice, and found myself reading out lines to my roommate, though I wouldn’t be able to explain why those sentences struck such a chord, like this paragraph, in the section “Dog Kickers”:

When Ruth sees something cure she immediately imagines someone doing damage to it. Crushing its face. Once in the library she heard a woman holding a tiny baby say to another women, I’ll be so glad when she’s too big to fit in the microwave. Ruth wishes for a child but know she can’t. She would think only of the microwave.

I also actually laughed several times while reading, too, which I don’t usually do, and at lines like: “Emmaline and Eddie both seem to think there would be dinosaurs at the zoo. They had confused the idea of a museum and the idea of a zoo and the film Jumanji.”

Besides the voice, I most enjoyed the backstories given in The Story of Ruth and Eliza. Both of them are really interesting characters, but it was Eliza’s childhood that really stuck with me. These are definitely characters that are going to stick with me, and that’s especially impressive considering how short this story is (61 pages). There’s also an element of magical realism to the story–is Ruth a witch? What does that mean?–which is left up to interpretation, which adds to the interest.

I was definitely impressed with this chapbook. There were a few typos, but only two or three, and other than that it felt polished and thoughtful. I have another book by Kristen Stone, Domestication Handbook, on my TBR pile, and after reading this one I’m really excited to start it.