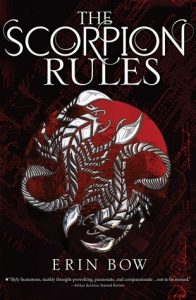 If you’ve been looking for the queer Hunger Games (or, at least, queer Mockingjay), this is the book for you.  Do you want to read about crushing oppression and the horrors of war, but with a bisexual protagonist? The Scorpion Rules is the book for you!

This was a bad choice for a readathon. I should have seen that coming, since this is clearly a dystopia, but the premise made it seem like a Fantasy novel:

Greta is a duchess and crown princess—and a hostage to peace. This is how the game is played: if you want to rule, you must give one of your children as a hostage. Go to war and your hostage dies.

A queer Canadian princess dystopia! I was expecting a page-turner. I was not expecting a YA 1984. At the beginning of the novel, I definitely was getting those Fantasy-esque sci fi vibes. Once Elián arrives on the scene though, things get darker. The group of hostages that Greta is a part of have grown up that way. They have been trained to be hostages. To follow the rules. Behave. They know the deal: just get through until they turn 18, and then they will go home, and become rulers–if they live to 18. If their parents don’t declare war. Elián has not been raised with this expectation. He is the hostage of a newly-established nation. He resists. He rebels. And he poses a threat to all of them.

This is a world that is ruled by an AI. The hostages are held captive by robot enforcers. There is a panopticon. The AI has aerial weapons. Machines don’t get tired. Which is all to say that escape is impossible. You can be shot down from the sky at any point. You will be electrocuted if you say the wrong thing, if you question the system. But Elián refuses to comply, and they are punished collectively–with increasing harshness.

This is not a light read. In fact, it becomes brutal. There is torture. The end has one of the most disturbing scenes I’ve read in a book. That was what reminded me of 1984: the ending.

You’ll notice that I haven’t mentioned a romance to this point, and that’s because although Greta has love interests, it really isn’t a significant part of the book. I did like Greta’s relationship with Xie, because it develops from such a close friendship, but I wasn’t exactly getting warm and fuzzy feelings.

I had mixed feelings about the villain, Talis (the AI). He speaks very casually (even in his “scriptures”), which toes the line to silliness at some points–but on the other hand, it almost makes him a more sinister character because of that. He does seem human.

As you can probably tell from this review, I have mixed feelings and thoughts about this. It wasn’t what I was expecting, but that’s my own fault for not knowing what I was getting into. I am definitely interested to pick up the second book, and hopefully I will have more coherent thoughts at that point.