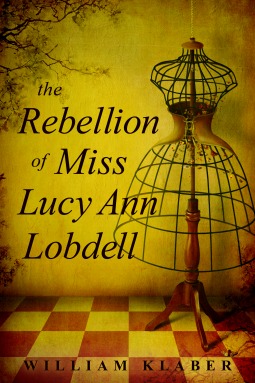 The Rebellion of Miss Lucy Ann Lobdell by William Klaber is a mash-up of a book: it’s a fictionalized memoir, part history and part novel. Lucy Ann Lobdell was a real historical figure, and the novel follows the basic events of her life, but between established facts, fiction fills in. In fact, this book is all about existing between binaries, and similarly, I was left feeling conflicted.

Take the cover. This is an absolutely beautiful book (with deckled edges!), and I especially liked that the back cover blurbs are excerpts from factual documents, like this:

“But he was the nicest fella I ever went out with.”

At the same time, this is a very feminine cover for a book that’s about someone who lived as a man most of their life. (I’m going to use female pronouns through the review, since that’s how the main character refers to herself most of the time, but he/him/his would be just as accurate.) It features a woman’s dress bust with butterflies (or moths?) erupting from it, and the title names the main characters as “Miss Lucy Ann Lobdell,” when she more often goes by Joseph, and the “Miss” seems unnecessary.

The other thing that makes me conflicted is the plot. It’s meandering, and a little slow-moving, but it is someone’s real life, so of course it’s convoluted. And it’s depressing, the kind of queers-never-win narrative that we usually try to avoid in modern stories, but this is Lobdell’s real life! This is what happened to her! You can’t really rewrite her a better story. But what I got stuck on the most was the racism. This story takes place in the mid-1800s in the U.S., which means it’s all about “settling” the land. There is constant referrals to the threat of Native people attacking the settlers, and general insults of Native people. This may be historically accurate to how Lobdell and her peers thought at the time, but I don’t think it excuses the text for perpetuating this. The author may not have been able to erase racism from Lobdell’s life, but he could have written in a Native character to have their own voice. Lobdell is less racist than the people around her, but not enough to really interrogate their assumptions. It would not have been difficult to write in at least one Native character with actual dialogue to challenge this in some way.

The writing is definitely strong, and I felt absorbed in Lobdell’s story, but it was a slow read for me. It was a narrative I wanted to dip into occasionally, not consume all in one sitting. As I’ve said, the plot isn’t traditional, it does meander, so it didn’t make me desperately want to know what was happening next. And Lobdell’s life was at times disturbing, especially because this is our real queer history. I appreciate knowing more about this queer person from history, but this probably isn’t a book I’ll want to re-read.

As for what flavor of queer Lobdell is, that’s definitely up for interpretation. She’s married to a man in the beginning of the story, but that is not a happy relationship. She is attracted to a few men in the story, but doesn’t want to actually be with them. After she dresses as a man, she feels attracted to women (‘like a man would’). She dresses as a man and goes by the name Joseph, but she does this so she can have access to the privileges that men do. At the same time, even when she’s discovered, she doesn’t jump back into a female identity. I read her as non-binary, personally, but as Klaber says, “just which of the modern labels of sexual orientation or gender should be applied to the historic Lucy is something I will leave for others.”

After the conclusion of the fictionalized memoir, Klaber follows this with a factual examination of her life that follows. I almost wish I had ended with the fictionalized story, because her real-life story ends less optimistically. Klaber meanders a bit into how he came to write this story, but it’s still an interesting examination of the facts around the story–and one detail in particular was too unbelievable to make it into the story, but did happen in real life! This is an interesting look at a historical figure, with compelling writing piecing together the disparate facts. I felt like Klaber was very respectful in his depiction of Lobdell, which I definitely appreciate. As I said, I do feel conflicted about this story, but I am glad I read it. And for the $0.91 the ebook is currently selling for, I would definitely, definitely think it’s worth the investment.