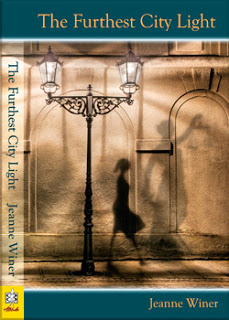 The Furthest City Light is a book about a public defender determined to win the case presented against her client, a woman who defended herself in an abusive relationship. Until it’s not about that at all, and the result of the case thrusts our protagonist in a situation she never planned for.

[Minor spoilers follow, just describing the setting change after page 50 or so]

This book was, how do I say this… weird. Predominately, it’s that the first 50 pages or so are about the trial, and the rest of the book is about war-torn Nicaragua. But from the first bit of dialogue exchanged between Rachel (the main character) and her client, I felt off balance. The first time Rachel meets Emily, her client, Emily says, out of nowhere, “I have walked out in rain–and back in rain. I have outwalked the furthest city light.” And Rachel replies, “They’re from ‘Acquainted with the Night’ by Robert Frost.” That is such a jarring and artificial bit of dialogue. I also was surprised to find that the book was set in the 80s, because it didn’t seem very different from a modern-day book, except that she had to find payphones instead of using a cell phone. After reading the author’s bio (which is at the beginning of the book), I realized this must have been to replicate the conditions of Nicaragua when she visited. In fact, this book has a lot of similarities to her bio: she was also a defense attorney and a rock climber, and also participated in the Sandanista revolution when she visited Nicaragua.

I had a few major issues with the book, however, apart from that weird dialogue. The first is Rachel’s relationship with her long-term girlfriend, Vickie. I made a note in the beginning of the book that Vickie seemed flat, and she never seemed like a complete character to me, probably because we don’t see her a lot. More importantly, though, their relationship is terrible. Rachel completely neglects her throughout the book, and it felt really uncomfortable. I don’t even really understand why she was in a relationship at all for this novel, since it just created that awkward tension. And at the end, [spoilers] there’s no resolution on their relationship at all[end spoilers]. And there isn’t really much of a plot. I understand that it’s kind of the point, [vague spoilers] that they don’t accomplish anything [end spoilers], but it doesn’t really pull me along in the story, since Rachel’s personal journey/identity crisis is pretty subtle as well. Also, [spoilers] at the end, she gets really sick and then NEVER GETS ANY PROFESSIONAL TREATMENT. What? She just decides to rest for months and never gets a diagnosis even though she is seriously ill. And again, there’s no closure or explanation [end spoilers]. But my main objection is that I had a vague feeling of unease reading about her trip to Nicaragua. I realized that it was because the horrific conditions in Nicaragua are used as just a impetus to Rachel’s journey of self-discovery. It’s that Eat Pray Love-style traveling to find yourself, which uses other countries for your own benefit. It’s even worse when it’s in this situation, where the conditions in Nicaragua were catastrophic. Using that setting for your character’s own existential angst seems demeaning to the situation. I also don’t really understand why this story took place in 80s Nicaragua, other than because the author was familiar with it. If it took place in current-day Nicaragua, or another country, then at least it could be raising awareness of crises happening now. But having it take place in the past negates that.

Between the lackluster writing, lack of plot, cringe-worthy relationship, and questionable use of setting, I was disappointed by this one. But again, tastes differ: Literally Lesbian posted a glowing review of this title.