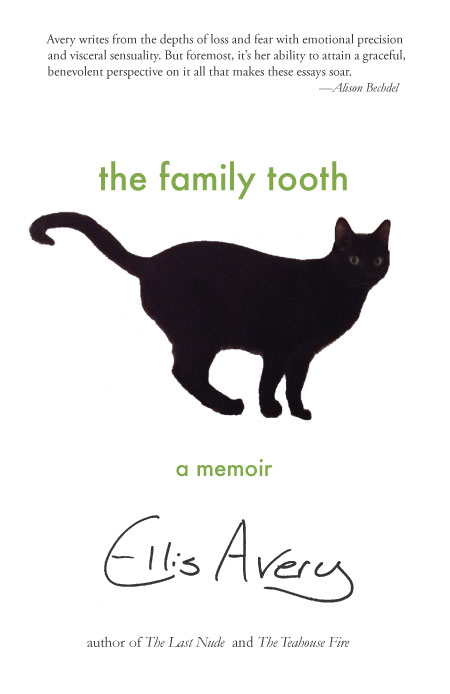 As soon as I finished The Last Nude by Ellis Avery, I immediately added her to my mental list of favourite authors, despite the fact that it was the only thing I’d ever read by her. Some stories are like that. The Family Tooth is a very different book, but it definitely has helped secure her place on that list.

The Family Tooth is a memoir composed of linked essays. Some of these are available as Kindle singles, or the whole book is available zine-style in the author’s Etsy shop. At first glance, it can seem disconnected. The essays cover Avery’s grief over the death of her mother, as well as her journey through dealing with severe arthritis and later cancer, partly through radically restricting her diet. Because they do concentrate on different subjects, the essays can stand on their own, but I think they’re much more powerful when read in sequence.

In the introduction to this collection, Avery warns that part of this purpose of these essays is to detail her discoveries about treatment of her illness so that other people with similar symptoms can use her research to help in their own lives. She encourages the average reader to skip these dry medical passages. It’s a testament to Ellis Avery’s writing that I realized at the end of the book that I had totally forgotten this warning, and despite the detail given, I had never noticed any “dry” segments.

The book begins by discussing her mother’s death, and the complex relationship Ellis Avery had with her mother–an alcoholic and emotionally distant figure in her life. Later essays that are primarily concerned with Avery’s illness still bring in this processing, including thought-provoking parallels between her mother’s life and her own that recontextualize and complicate the initial impression we have of her.

It’s Avery’s writing that really makes these essays stand out. She knows just how to give a detail or mental image that elevates the whole narrative. She weaves in lines that link these disparate subjects together effortlessly. I found myself reading lines out loud to my roommate, and at one point we both paused after I read out a sentence and then said simultaneously “That’s such good writing.”

Grief memoirs and illness memoirs are not usually genres that I gravitate towards, but I will continue to read anything this author decides to write, and I would recommend you join me.

One Reply to “Danika reviews The Family Tooth by Ellis Avery”