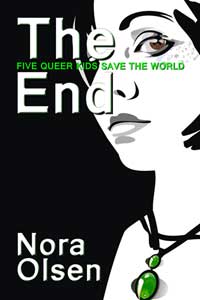 I really enjoyed the beginning of this book. First of all: “Five queer kids save the world”. What better tagline is there? And I love the cover. To begin with, we meet each of these kids briefly in 2009. Each scene ends with an intriguing line something like “They wouldn’t see ____ again until 2014.” After that, we skip to 2014, when nuclear war has broken out. It is wiping out most of the human race. But, of course, our main characters are survivors, partially to do with some of them having magical amulets. Which is interesting, because it turns out that The End is a Fantasy novel. The nuclear apocalypse is caused by a squabble between two gods. The tone shift between this and the destruction on Earth is a little bit jarring, and overall it didn’t quite match up for me.

I liked the premise of this book (though the gods bit was unexpected, especially Muldoona and her Frotress of Despair), and most of the characters. Skilly is over five thousand years old, thanks to his amulet. He is bisexual, and has had to watch everyone he’s ever loved die. The concept is interesting, and he seemed to be a realistic result of that background. Then we have Julia, who I can’t seem to describe succinctly, but I really liked her. And Marley, who was locked in a juvenile detention facility when the end of the world started, and is another favourite character of mine. Vikki is a childhood friend of Julia’s, and is a survivor of not only the apocalypse but also eating disorders and a dysfunctional home. And then there’s Ginger, who seemed completely underdeveloped. She is the other bisexual character. After reading the Bisexual Books tumblr, especially their review of The Difference Between You and Me by Madeleine George, I’ve been trying to pay more attention to the portrayal of bisexuals in the queer books I read. Unfortunately, I’m not sure The End handles this representation very well. Ginger ends up almost completely unlikeable, and [spoilers, highlight to read] her magical power is “sex appeal”. Oh wait, never mind, it’s “persuasion”. So she’s really good at manipulating people. Worse, she betrays the whole group, though she goes on to sacrifice herself for them as well. [end spoilers] Skilly also ends up pretty unlikeable.

Other than that, I felt like the ending was a little anticlimactic, and also left with some unanswered questions. I loved the premise and the beginning, but between the tonal shifts, the representation of bisexuals, and the lackluster ending, I felt disappointed. I still liked it, but not as much as I wanted to. (Which is similar to how I felt about her other book Swans & Klons, so it makes sense.)

3 Replies to “Danika reviews The End by Nora Olsen”