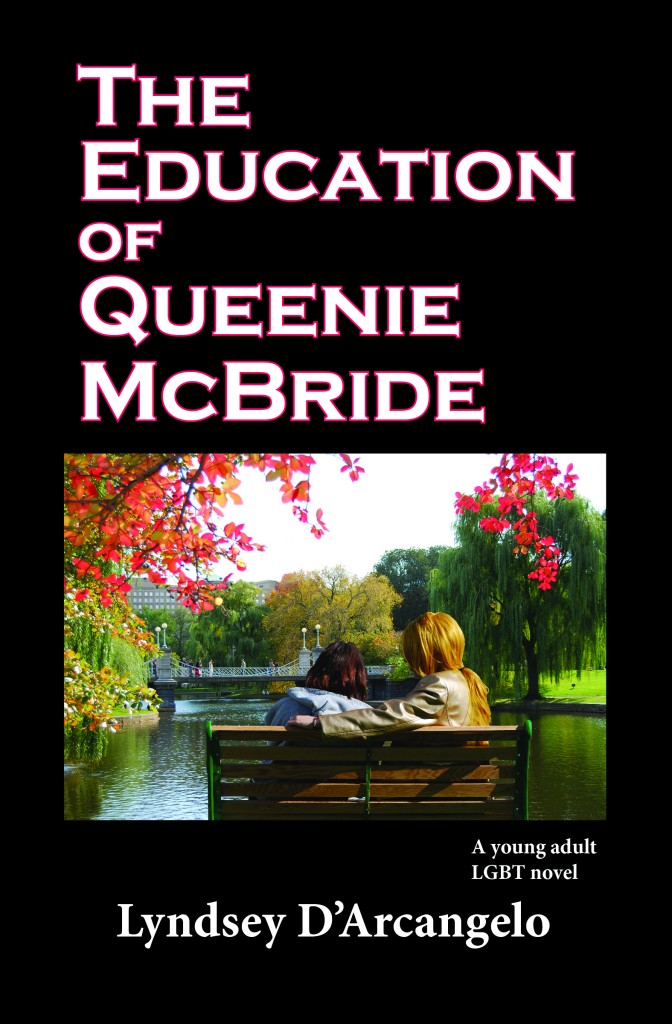 When I finished the prequel to this book, The Trouble with Emily Dickinson, I said I was excited to read the sequel, because Queenie kind of steals the show in the first book and gets to be the star in this one. Predictably, I liked Queenie more as a main character than JJ. She is a bit infuriating (the back cover blurb describes her as “over-privileged and overconfident”), but that makes her journey all the more interesting. Queenie already has a bit of a character arc in the first novel, but in this one she is reeling at being in college and in a big city. She can no longer coast her way through life, and she’s directionless. When she stumbles (yes, literally) on a homeless gay girl in her city, she begins to become aware of her own privilege and finds new direction in trying to be there for Pudge.

I still have most of the same issues that I had with the writing of The Trouble with Emily Dickinson. There are a few typos, for instance, and some of the dialogue seems unbelievable (“you’re as emotional as a scorned 50-year-old menopausal woman”?). I also disliked [mild spoilers, highlight to read] that The Education of Queenie McBride got weirdly meta: JJ writes the first book and then talks about writing Queenie’s memoir. It seems even weirder because big sections of the first book are from other people’s perspectives… [end spoilers]

I found the storyline much more compelling in this volume. For one thing, as I said, Queenie has to change and grow in a big way. And I did appreciate that this book addresses queer teen homelessness, though it is in a book about a rich girl, and as far as I know all the characters are white. Queenie has to grow up, and she struggles with caring about Pudge while Pudge is defensive and skittish. Queenie fights to take on major responsibility while everyone around her still thinks of her as the immature teenager she acted like only months ago. Pudge, of course, also struggles to deal with not only her immediate safety and hunger, but also her conflicted feelings about her parents.

The subplot that really brings some added depth to the story is that JJ is going through her own, subtler coming of age. [spoilers for tTwED] She is attempting to maintain a long-distance relationship with Kendal, and it’s interesting to see what happens after the happily-ever-after of the first book. [end spoilers] She is also trying to get used to life in a big city, and she is feeling completely lost at school: she is no longer the star of her writing classes. As Queenie goes through a sudden and dramatic attitude change, JJ figures out things about herself in a more subdued way. It was nice to this continuation of her story even if it wasn’t center stage. Oh, and have I mentioned how awesome it is to have three major lesbian characters in a book? And they’re not even paired off with each other!

I have to say that I have no idea about the realism of the way queer teen homelessness is presented in this book, because I don’t know anything about what it’s like in a big city in the United States, but I would love to hear people with more knowledge about respond to the book. I was a little confused about the minimization of money as a factor in homelessness. I understand that Izzy (a social worker at the shelter) wanted to impress on Queenie that she couldn’t give Pudge a $50 and think that she really helped anything, but Pudge refuses Queenie’s money for food–even though she begs for money–and Izzy insists that the only way Queenie can help is by volunteering. Queenie’s family is ridiculously wealthy, and although I know that money isn’t the only factor in homelessness, I can’t help but think that Queenie could have helped the shelter in some way with that privilege, and I can’t imagine that shelters do a lot of turning away of donors.

Although I did have some questions about the novel, I was definitely pulled into The Education of Queenie McBride and zipped through it pretty quickly. If you’re on a lesbian teen book kick (and I think most sapphic bibliophiles go through at least one) and have run out of material, try picking up these two. And let me know what you thought of them!