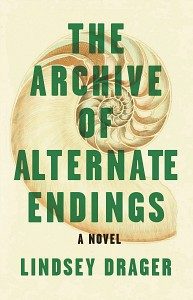 This is a story about storytelling, which means I was immediately invested. The Archive of Alternate Endings explores the story of Hansel and Gretel, as it plays out in the returns of Halley’s comet throughout time. From the first chapter, I was delighted by the skill at play here. Two stories, which concern different people in different time periods, wind around each other and play off one another. The first chapter felt complete in itself, a bittersweet story set during the AIDS crisis while also being about the Grimm brothers. I wasn’t sure how this would play out in novel format, but the next chapter lived up to it, following different people and times, but with enough threads that I felt sure they would twine together by the end of the book.

It turns out that Archive attempts to do many things: it’s not enough to be about storytelling as demonstrated in the tellings of Hansel and Gretel over the ages while being framed by Halley’s comet. Until very recently, something this experimental wouldn’t also be queer. At least, it wouldn’t be queer the way this book is, introducing multiple gay men protagonists in the first chapter and lesbian protagonists in the second. Only a few years ago, you might see a novel like this end up queer—they might slip that in later in the book—but it wouldn’t be right away. That would be seen as limiting your audience even further. I’m relieved to finally be in a place where books like this are published, where they aren’t limited.

As I mentioned, this attempts to be a lot of things. Each story has a pair of siblings: stand ins for Hansel and Gretel. This isn’t just a book about stories, it’s also concerned with the relationships between siblings. I ended up liking those first two chapters best, because as this story spirals, it seems to lose cohesion: it’s about not just storytelling and Hansel and Gretel and Halley’s comet and sibling relationships, but also the end of the world, the AIDS crisis, spider webs, and even mouths become recurring themes.

So many characters don’t have names, just relationships with each other, and it was only near the end that I started to understand how they fit together: I felt like I had to take notes to realize how characters like “the illustrator” and “Halley’s niece” were related. It seemed like I’d have to immediately start the book over again to have any chance of really getting it. When I read the notes at the end, I learned that this was originally several short stories published separately and reworked into a novel. For me, they don’t really cohere. I love the concept, but I didn’t feel like it was pulled it off. I lost interest as it continued. There are definite moments of brilliance, and so much potential, but I think I would have enjoyed this better if I had just read the first two short stories, or maybe if it had been packaged as a collection of related short stories instead of being advertised as a novel.

Of course, this is a demanding, ambitious book, and I fully admit that it might have just gone over my head. This may be one I have to come back to and spend more time with to fully appreciate.