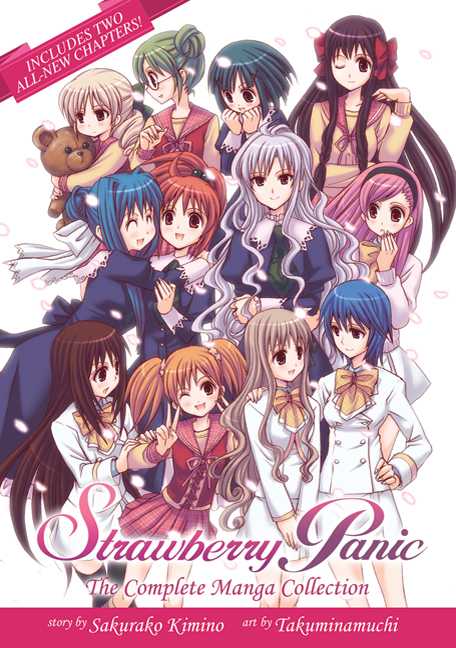 I have to preface this review by saying that I haven’t read much manga in general, nevermind yuri in particular, so I don’t have a lot of knowledge to draw from in evaluating this against other examples in the genre. For the most part, though, this is what I was looking for from it: a cute, fluffy story about schoolgirls in love.

When I first started reading I was intimidated by the huge cast of characters. Although there is one girl, Aoi Nagisa, who I suppose is technically the main character, all of the girls on the front cover play big roles in the book, and the story is from many different perspectives. The plot revolves around a competition between three schools, a kind of couples contest (all three schools are girls-only). Two of the characters are new transfers into these schools, who are picked by upperclassman to be partners in this competition. The older girls are admired by the whole school and vaguely “experienced”, while the younger girls are naive and “innocent”. It’s a trope that made me roll my eyes a few times, but it’s also one that can be fun to watch play out (there’s a reason why Xena-inspired stories are so prolific).

I did find myself getting used to the large cast of characters, but I did have some other issues with the story. For one thing, the main romance between Nagisa and Shizuma (the back cover describes her as a “serial heartbreaker”) has some troubling power dynamics, as well as some of the similar relationships in the book. While Amane has a similar power position in relation to Hikari, she tends to approach the younger girl a lot more gently. Shizuma, on the other hand, is forceful to the point of nonconsent.

What surprised me in the story was that although there are established couples, there is also room for other relationships to develop. I was rooting for Nagisa to pair up with her roommate instead (partly because of Shizuma’s overbearing personality). The competition aspect was also a lot of fun, and I found myself–despite the tropes at work–not sure how things were going to play out by the end. Unfortunately, and this is my biggest complaint about this collection, I was under the impression that “The Complete Manga Collection” was going to tell the complete story. Instead, the narrative abruptly ends mid-competition, with nothing wrapped up. Apparently Strawberry Panic is a franchise that was originally short stories, and also includes an anime and light novels. The manga seems to have been an add-on, and was never completed. It’s a shame, because I was really enjoying the story, especially all of the girls’ personalities and how they played off each other. I’d like to see the anime or pick up the novels, though apparently they differ substantially from the manga. This is a story I would recommend, but the manga probably isn’t the best place to start with it. Hopefully I can get my hands on the light novels and let you know if they’re a better place to start.