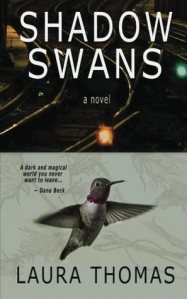 I was intrigued as soon as I heard about the premise of Shadow Swans: a reclusive young woman who lives in an abandoned building filled with handmade wire hummingbirds falls in love with another young woman who lives in the subway tunnels. Together, they explore the tunnels beneath the city. If I had read the description of their characters gives on the back of the book, describing Den as “shockingly beautiful and well-read” and the main character, Ruby, as “a filthy rich misanthrope”, I probably would have been less interested. I think that the major divisive element of Shadow Swans is our narrator, Ruby. Ruby is entirely a filthy rich misanthrope. She finds everything and everyone shallow and meaningless. She believes herself to be the only one who thinks outside of such petty concerns as sorority barbecues and making friends. She despairs of her ennui and eagerly chases after Den and her underground life because their poverty and anger makes her alive–but, of course, she doesn’t have to risk any of her wealth to do so. Ruby is shallow and self-absorbed and not very likable, but I liked reading about her. It is entirely an accurate portrait of many young people, and I can’t deny that my teenage self may have had some things in common with her. The overwrought prose seemed to be a deliberate reflection of how Ruby would think and write. I found it sort of funny, reading about how she hates her name but keeps it to be ironic and to suffer.

Besides finding Ruby charming in her ridiculousness, I was also genuinely interested in the plot. The relationship between Den and Ruby is complex, because in some ways Ruby is selfish and shallow to be thrill-seeking by basically doing poverty tourism and trying to escape the “ennui” of her well-off life by vicariously experiencing the dangers of being homeless. At the same time, Ruby does care about Den and Den is using her in some ways as well. Ruby does take a lot of risks just to be around Den, and really wants the best for her. They have a tumultuous friendship and that turns into an ambiguous relationship. I was interested to see whether Ruby would smarten up or remain self-absorbed.

On top of that, I loved the idea of this underground adventure as they explore secret government tunnels connecting the East coast. The story may, as Anna K said in her review, “often stretch believability”, but if you can suspend your disbelief, I thought it was fascinating. As for Ruby smartening up, I’m not really sure if she did. In some ways, Ruby just earns her callousness that seems undeserved in the beginning of the novel. But I think ultimately she does learn something about her previously self-absorbed attitude, even if it’s not explicitly stated in the text. If you’re looking for a dark adventure story or are interested in teen dystopian books, I think this one will appeal to you as well.

Check out Jasper and Anna K‘s reviews of Shadow Swans as well!

One Reply to “Danika reviews Shadow Swans by Laura Thomas”