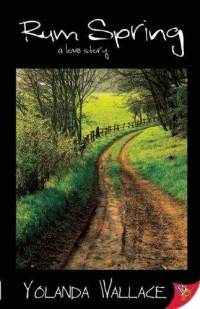 I have to be honest: many of the “lesbian fiction” (really more like lesbian romance, but they’re typically labelled lesbian fiction) books I have read don’t have the best writing. I’m not saying that the writing has to be lyrical or award-winning, but most of the lesfic books I’ve read have had writing that was, at least at times, distracting. For instance, this review so far seems to have a distracting writing style, at least to me. This is one of the many reasons I don’t write novels.

That being said, I found Rum Spring a refreshing change. The writing didn’t distract from the story. It didn’t seem clunky, or over-descriptive. It served exactly its purpose, without drawing attention to itself. I really, really appreciated that.

The subject matter was also interesting. Rum Spring is about a romance between an Amish girl and an English (non-Amish) girl. The romance seems to jump suddenly sometimes in terms of how their emotions develop, but the physical romance (not just sex, but dating, etc) seemed to move at a pace that made sense for the story.

Overall, however, I enjoyed Rum Spring. The writing was possibly the best I’ve seen for the modern lesfic genre, and the premise and setting was intriguing. I would recommend this one.