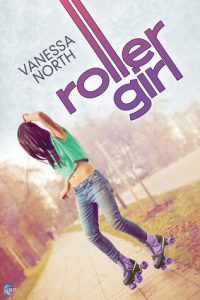 I’ll preface this review by saying that I feel uncomfortable talking about a Riptide Publishing book right now. (I read this book before I heard about the racism and harassment happening behind the scenes at Riptide.) That being said, it’s a shame to punish all of the authors involved in this press (also, the editor of this book was not the one mentioned in the post), and I did really enjoy this title–which is one of the few trans F/F romance novels out there.

Roller Girl follows Tina, a trans woman who has recently divorced as well as retiring as a professional athlete. She’s adrift. So when she gets invited to play on the local roller derby team, she jumps at the opportunity. And it doesn’t hurt that the coach is a swoonworthy butch woman. They are drawn to each other, but Joe doesn’t want to endanger the team by admitting to dating a teammate, and Tina doesn’t want to stay a secret forever.

I don’t read a lot of romance, but I was delighted with this. Tina and Joe immediately click, and–at least initially–there’s a lot of open, healthy communication happening. They do both jump into angry tirades sometimes, but generally they try to talk to each other about their problems. (I hate when the entire conflict of the novel could be resolved if the characters just talked to each other.) I also loved that it was set in the world of roller derby! I don’t think any queer lady needs to explain why that’s a fun bonus.

I’m cisgender, and I don’t believe this is own voices representation, so I don’t want to be the arbiter of whether this is good trans representation, but I did really like reading a fun romance with a trans woman lead. It does come up in the story, but it’s just as much about Joe and Tina’s romance, or Tina’s journey to self-confidence, or trying to save the gym that she works at as a personal trainer. It’s a part of the story, but it’s not the whole story.

I wasn’t expecting this to get quite as steamy as it does! As I’ve noted, I’m still pretty new to the romance genre, and I was surprised by the amount and intensity of the sex scenes. I’m not complaining! I thought Tina and Joe had great chemistry, and they were very believable. But I did feel awkward reading it on the bus and in the break room at work!

This was a quick, fun read that I would definitely recommend.