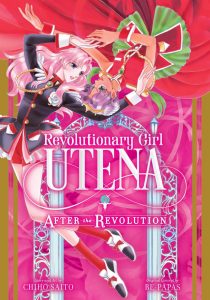 Revolutionary Girl Utena: After the Revolution is a collection of three short stories to celebrate the 20th anniversary of Revolutionary Girl Utena. If you haven’t watched the anime or read the manga, I definitely wouldn’t recommend starting here. This acts more like an epilogue. Utena is an almost impossible series to describe: it’s about a boarding school with a secret dueling club, a Rose Bride, and an upside down castle that descends from the sky. It’s deeply metaphorical, often surreal, and (in the case of the anime) sometimes comical. All versions of Utena are fundamentally about the relationship between Anthy and Utena (pictured on the cover). Some versions of that relationship are subtextual, and others are blatantly romantic. If you like fairy tales with lesbian subtext, or dark and strange headscratcher stories, or just want to dive headfirst into a completely engrossing world, I highly recommend Utena–just start with the anime.

It feels a little absurd to review After the Revolution, because you probably already know whether you’re going to read it or not. I’m a big fan of Utena, even if I can’t say I understand it, so I knew I’d be picking this one up. If you’re on the fence, I’d say this is classic Utena: beautiful, confusing, and a little frustrating. It follows some of the characters 20 years later, though whether it’s the characters from the anime, manga, movie, or a unique version is hard to say.

Of course, all Utena versions are dreamlike, but these stories step it up a notch. It feels like the end of the cycle here: the spiral is getting tighter. The centre cannot hold. Anthy and Utena flit in and out of the stories, but most of the page time is devoted to the other characters: Touga and Saionji, Juri and Shirori/Ruka, Miki and Kozue. I’d recommend picking this up without knowing a lot else about it, but if you want the details, here are the basic premises of each story.

The first story is the most surreal of the bunch. Touga and Saionji are rival art dealers, who each get a letter saying, “You who seek revolution… Return to the academy.” It turns out that “The Revolution” is a painting that Akio painted, and after his suicide, the value skyrocketed. Akio appears as a ghost and tells Saionji and Touga that if they find and protect the painting, he will lead them to a version of his will that bequeaths his whole art collection to them.

Juri’s story as well as Miki’s feels familiar, though it’s a different telling. In a way, they’re simplifications and distillations of their stories. In Juri’s story, she is explicitly in love with Shiori (she starts fencing to try to be the “prince” Shiori would like). Each story has a duel between characters (Touga and Saionji, Miki and Kozue, etc). It’s unclear, though, whether this is the end of their stories, or just a continuation of an unending cycle. They are fairly optimistic, as far as Utena goes.

In these stories, Utena has taken on the role of Dios. She appears in other people’s stories to push them along, then disappears. It’s unclear how the stories connect, but it seems as if she’s walking through each character’s dreams, on her way to find Anthy again. It feels as if she keeps reaching back farther and farther, to stop the cycle of abuse before it starts. (I saw someone on tumblr point out that revolution, as in “the power of revolutionize the world” can also be interpreted as literally revolving once–a circle. It blew my mind!)

This is Utena, so there is some disturbing material. Trigger warnings for suicide, death, child abuse, kidnapping, incest between siblings, and physical abuse.

If you’ve read this version of Utena, I’d love to hear what you think! There are so many threads to pull on here, so I’d love to get different perspectives.