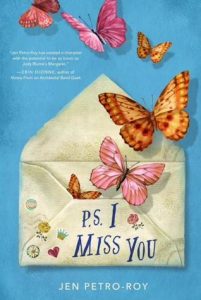 My first introduction to P.S. I Miss You was Jen Petro-Roy’s Entertainment Weekly article, where she talks about how her book didn’t get a tour through schools, because all but one school considered it “too mature.” That’s a shame, because this middle grade book has a lot to offer. It’s an epistolary novel, told in letters from Evie to her older sister, Cilla. Cilla is 16 when she gets pregnant, and her parents have shipped her off to live with her aunt in the country until she has the baby, gives the baby up for adoption, and goes to a Catholic boarding school. Evie can’t understand why her sister would sin, or why her parents would react so badly, or why Cilla won’t write back, and she processes all of these feelings through the letters.

I’m not sure it was the intention, but I was getting stressed out reading this book. As the novel progressed, I got more nervous about why Cilla wasn’t writing back. I seriously considered skipping to the end, but settled for tearing through it instead, even reading it while walking home. Aside from my anxiety about Cilla, though, I was also invested in Evie. She is adrift, trying to figure out how her life has changed so dramatically. She oscillates between being confused, frustrated, and angry. Meanwhile, she’s starting to get closer to the new girl in school, June. June is pretty and funny… and also an atheist.

As her friendship with June develops, Evie questions her own religious beliefs. When she presses June to explain why she’s an atheist, June puts the ball back in her court. Evie begins to wonder–if being Catholic meant her parents sending Cilla away, is it really a good thing? We see her questioning through the lens of the letters, which introduces a bit of a buffer. Evie thinks there’s something different about her friendship with June–but nevermind, no, forget she wrote that last letter.

The juxtaposition between Cilla and Evie worked really well: Evie is terrified to tell her parents about her growing suspicion that she may be gay, because she’s sure they’ll send her away, just like they did when Cilla “sinned.” She begins to reconsider if she really agrees with what she’s been told sin is. Her parents are deeply flawed people, and seeing that is painful. They are human, and they’ve made mistakes. But that doesn’t mean that Evie has to follow in their footsteps.

P.S. I Miss You is a heartfelt story about developing into your own person. I can see how it’s considered controversial, because it’s all about questioning what you’ve been taught to believe unwaveringly. It validates that your feelings–even if you are only 12 or 16–are just as valid, and you deserve to have the space to explore your own possibilities. I’d recommend this for middle graders and adults alike.

One Reply to “Danika reviews P.S. I Miss You by Jen Petro-Roy”