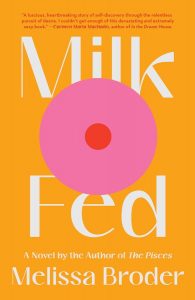 There are some books–very rarely–that I read and form such a personal attachment to that I don’t want to share them with the world. This is one of them. I picked it up based on the fact that it was queer and had a blurb from Carmen Maria Machado; that was about all I knew about it. It turned out to be an immersive, raw, sometimes overwhelming reading experience.

This follows Rachel, a twenty-something woman who is obsessed with food. She carefully counts calories and dutifully exercises to keep thin. She is ravenous. Every moment she is awake, she is thinking about food. She was raised to prize and police her body, and despite this tight control she keeps over her weight, it’s never enough for her mother. Rachel is a woman repressed. She is either bisexual or a lesbian, but she’s pushed that down most of her life. She desperately wants her mother’s approval, and she feels like her hunger is bottomless. In her mind, she has to exert this control because if it slips for a moment, she will spin out of control. She will never stop eating. She will never stop gaining weight.

During a session, her therapist asks her to do two things: 1) To go on a 90 day communication detox from her toxic mother, and 2) To sculpt her fear of gaining weight. Rachel agrees, and she uses all of the clay available to her to sculpt a fat woman. Her therapist says, “I think she’s quite lovely. And I think she’s worthy of love–more than worthy of love, actually. Don’t you think so?” Rachel storms out of the session and doesn’t return.

The next day, she goes to get her daily low-fat yogurt (no toppings, filled just to the line) and meets a new employee: a beautiful fat woman who fills her cup past the line and comps her some sprinkles. Rachel is panicked: this does not fit into her calorie plan. Instead of throwing the extra yogurt out, though, she finds herself devouring it, and coming back every day. Soon, she is falling for Miriam, and every time they are together, she finds herself veering from her controlled food plan.

The main character struggles with her repressed sexuality, her issues with food and her body, and her mother issues, and those all get tangled up in each other–which is my way of trying to tactfully give a content warning for her fantasizing sexually about a (fictional) mother/daughter relationship. She is looking for mother figures in the wrong places, desperately wanting the unconditional love she never received as a child.

This is a darkly comic book that had me highlighting and underlining on almost every page. On her first boyfriend: “I began dating him by default when one night, in his car, he put his hand on my thigh and I was too hungry and tired to deal with moving it. I ended things a few months later, when I got the energy to move it.” Her assessment of her therapist: “She was probably someone who genuinely enjoyed a nice pear.” On approval: “What I wanted most was for this certified hot person to see a hotness in me, thereby verifying, once and for all, that I was hot. It wasn’t that civilians didn’t find me attractive. But for a licensed hot person to verify me? That was the real shit.”

I found myself reading this book compulsively. I fell completely into Rachel’s worldview and couldn’t tear myself away. If you are someone who struggles with disordered eating or body image issues, this isn’t a book to pick up lightly. In a way, I was reading Rachel like Rachel was watching Miriam: as the fear and the secret dream. The idea of being so in control, contained, and thin is attractive–even though I know those thoughts are extremely unhealthy. At the same time, it was a cathartic read. Over the course of the book, Rachel goes from extreme restriction to feeling out of control to discovering something like balance. It’s a book that asks, What is your worst fear of your body? Isn’t that person worthy of love?

This book had me almost in tears several times. I think that many–most?–women fear being out of control, and often feel like they’re right on the precipice of it. This story asks, What happens if you let go? If you fed that hunger until it was appeased? “What do you have to lose?” the Rabbi in her dreams asks. What is so desirable for Rachel about being thin, hungry, and alone?

Rachel has been sexual, but as an object more than a subject. She’s only ever craved being desired. With Miriam, she’s discovering desire, discovering herself as sexual agent. It’s also a celebration of fatness. The beauty and freedom of fat. And it’s a rediscovering of her body, learning to listen to what it needs and desires. This doesn’t have a romance ending, but it’s the messy, imperfect close this story needs. She doesn’t and shouldn’t get everything she wanted. But she can be kinder to herself and stop going to the hardware store for milk.

Honestly, this is just scratching the surface of Milk Fed. I haven’t even mentioned how much discussion of Judaism is here–Miriam is devout, while Rachel is lapsed and is trying to rediscover her relationship with it. And I haven’t really talked about Miriam’s character at all, or the ups and downs of their relationship. Still, I hope this review gives you some sense of the journey I went through reading this. It was a cathartic, immersive read that I will not be able to forget.