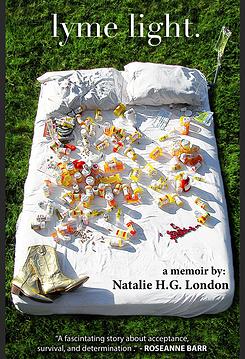 Lyme Light is a memoir by Natalie H.G. London that focuses on her experiences with Lyme disease. This is the first time I’ve read a memoir focused around an illness, and I’ll admit, I was skeptical about how much London could write about having Lyme disease without rehashing the same topics. I was definitely underestimating both London’s storytelling abilities and her circuitous route from first being infected to being diagnosed and treated.

This is not just a description of having Lyme disease, however. Where Candace Walsh used food in Licking the Spoon and Barrie Jean Borich used geography in Body Geographic, London uses illness as a theme and framing device while exploring many different aspects of her life. She delves into being a musician, her time as a student in Columbia, as well as many different relationships (familial, romantic, platonic) forming and falling apart over time. Woven into this is the first appearances of symptoms and her attempts to self treat them, then eventual visits to numerous supposed professionals to get diagnosed, bouncing from psychologists to clinics to hospitals, getting different answers every time. Meanwhile, London discovers which of the people in her life are willing to stick around while she is going through this, and finds comfort in endless reruns of Roseanne and Beverly Hills, 9020.

It’s a fascinating read, both for London’s personal story and her skill at representing what it’s like to be chronically ill. It’s a story that definitely won’t give you a whole lot of faith in the medical profession, but it will give you an idea of what it’s like to have to deal with it. London has an understated humour in Lyme Light, which, along with her flowing narration, makes this a quick read despite dealing with extremely dark subjects.

One of the aspects that I enjoyed about this book was that it’s the first queer memoir I’ve read that doesn’t include a coming out story in any way. London is bisexual, but this is just taken as given the entire story. No one makes any comments, there’s no story of her telling anyone, it’s just casually stated. At one point, London starts flirting with a girl in front of her own mom, and when the girl leaves her mom says that she thinks the girl likes London. There’s not even an acknowledgement of “Yeah, my mom is cool like that”. As much as I do enjoy reading memoirs that do tackle that, it’s refreshing to have a narrative that doesn’t revolve around coming out.

There are some errors (typos, grammatical errors) in Lyme Light, and the writing is easy to read but not especially poetic or quotable, but it gets the job done. The story is definitely worth the read. I also found it intriguing when I was picking up the book that a) Natasha Lyone (from Orange Is the New Black) voices the audio book and b) multiple Roseanne (including Roseanne herself) and Beverly Hills, 90210 actors blurb the book very highly. So if the review doesn’t convince you, maybe a sample of the audio book will: