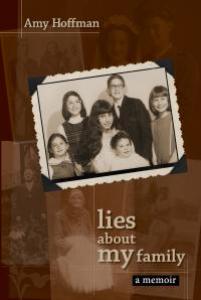 Perhaps it’s unfair to read a book that you know you’re not in the mood for. Lies About My Family got positive reviews by Alison Bechdel and Anita Diamant, and I can’t say that it’s badly written… It’s just not a book I personally enjoyed very much. Lies About My Family is, of course, a memoir about Amy Hoffman’s family. They are Jewish immigrants, and Hoffman tells the stories of three generations of her family, primarily focusing on their identification and yet struggle with Jewish culture and religion, as well as the migration narrative. It covers many different people’s stories: some connecting, some just fragments. It is a compilation of stories that doesn’t seem to have a narrative thread of its own, instead grouping stories into nebulous categories that skip from person to person and across time.

I think that my problem is that I have read too many similar memoirs at this point. I suspect that more lesbians write memoirs than most of the rest of the population, because I have received many autobiographical books to review. Some are fantastic and have their own story to tell. Some don’t have a truly unique story, but are written so beautifully that it carries the book. I’m reminded of The Body Geographic, except that that memoir used the metaphor of maps to connect stories together, just as Licking the Spoon used food. I definitely think parts of this memoir were interesting, but overall I felt like some overarching thread was missing. I also feel like I’ve read a lot of family migration memoirs (though not really any with people of colour, oddly). As you can tell, this is an entirely personal preference. If you’re interested in a well-written Jewish lesbian memoir that also focuses on her family’s migration from Russia to the US, you will probably enjoy this book! It is also a pretty quick read: only 150 pages. It just wasn’t what I was looking for right now. I am still intrigued to read Amy Hoffman’s other book, An Army of Ex-Lovers: My Life at the Gay Community News.

2 Replies to “Danika reviews Lies About My Family: A Memoir by Amy Hoffman”