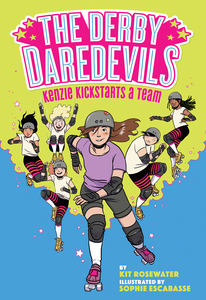 The Derby Daredevils is a middle grade series following a junior roller derby team, with an #ownvoices queer main character. Now, if you’re like me, you’ve already clicked away to order a copy or request it from your library. And that would be the correct response. I am jubilated that we are finally at the place in queer lit where a mainstream early chapter book can have an incidentally queer main character. Break out the streamers, people. We’ve made it!

But on to the book itself! Admittedly, I’m a little older than the target demographic. Kenzie and her friends are 10 years old. Her best friend, Shelly, and her are obsessed with roller derby. Kenzie’s mom is a derby girl, but she can’t try out herself until she’s 15–that is, until a junior derby league opens up. Shelly and Kenzie are ecstatic, but in order to make sure they can stay the Dynamic Duo (and not be broken up into different teams), they have to form a 5 person team and try out together. But will being part of team threaten their Dynamic Duo stasis?

This is aimed at 8-12, and I think it’s a perfect fit for kids at around the Wimpy Kid stage. It’s short, and packed full of illustrations! (They’re every 3 pages or so.) I loved seeing the diverse group of kids come together–diverse in terms of race and personality. Kenzie’s dad is trans, and I think this is the first book I’ve come across where that is casually mentioned. Kenzie refers to his life before transitioning as him being like an “undercover agent.” Later, when she realizes she has a crush on a girl, she empathizes with that status.

This is the first book in the series, and it’s under 200 pages, so we really just get an introduction to each of the characters (as they get added to the team), and an idea of their interactions. From what I’ve seen, I like the characters and their varied relationships: I look forward to seeing the dynamics develop over the course of the series, and to getting to know each of the characters individually. (I think each of the girls on the team will have their own point of view title, and at least one other character is implied to also be queer.) [spoiler:] It’s implied that Kenzie’s crush returns the sentiment, so we’ll see how that develops over the series! [end spoiler]

The next volume comes out in September, and I will definitely keep going with it! If you have any kids in your life in the 8-12 range, pick this one up for them! It’s shades of Baby-Sitters Club and Lumberjanes, with its own derby flair. Perfect for kid daredevils with or without skates!